Genocide; The “Ethnic Cleansing” of Bosnia 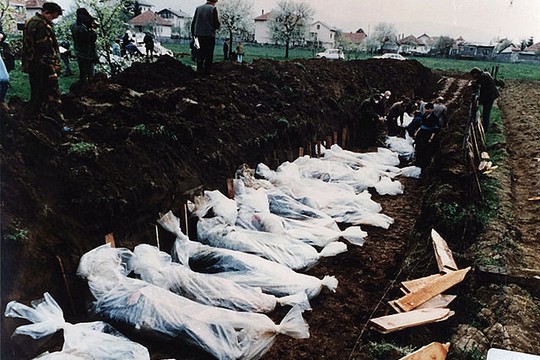 The Bosnian Genocide, which was the “ethnic cleansing” of Bosnians and Croats, happened in April of 1992. The oppressors of this genocide were the Serbs. They felt that they were the superior race and decided that they needed to eradicate the weaker ethnicities. This came after the death of Tito, the leader who unified the former Yugoslavia, after his death, Bosnia gained its independence which angered the Serbians and which led them have a bloody war (Krkljes). The genocide in Bosnia impacted the world’s politics, economics and ethno-social dynamics. The Serbs targeted Bosnian Muslims. About 100,000 Bosnian Muslims were murdered.  Serbia, together with ethnic Bosnian Serbs, attacked Bosniaks with former Yugoslavian military equipment and surrounded Sarajevo, the capital city. Many Bosniaks were driven into concentration camps, where women and girls were systematically gang-raped and other civilians were tortured, starved and murdered.

It is upsetting that initially the world decided not to get involved to try to stop the Bosnian genocide. Eventually, however, the world set up a court to try to punish those responsible. When the U.S. president was George H.W. Bush, and when the U.S. president was Bill Clinton, America at first decided not to get involved with trying to stop the genocide in Bosnia (Krkljes). At these points in time, the U.S. said it was not getting involved because it was none of their business (Krkljes). It is hard understand why America said this and decided not to get involved to try to stop the genocide (Krkljes). One would think that the U.S. thought that the Holocaust that took place during World War II was so horrible that it should never happen again. It is difficult to understand why the U.S. stood by and watched and let it happen again in the genocide in Bosnia.  This makes me angry, and I think it should make us all upset. What should make us even more angry is that not only did the U.S. watch and let the Bosnian genocide happen, but the world stood by and watched and let the Bosnian genocide take place (Krkljes). It is unbelievable to me that the world stood by and watched, especially after the awful Holocaust of World War II. The world decided not to get involved initially, but at least the world wanted to punish the persons who had committed the genocide. In the autumn of 1992, the United Nations created “the Commission of Experts to investigate possible violations of international humanitarian law” in Bosnia (Ball 105). These experts wrote a report to the United Nations (Ball 105). In their report, the experts stated that international law had been broken in Yugoslavia, because there were mass killings and ethnic cleansing, among other issues (Ball 105).  Because of this report, in early 1993, the United Nations created a court to address the genocide and possibly to punish those persons who had committed crimes against humanity if they were found guilty by the court (Ball 105). This court was called the International Criminal Tribunal for the former Yugoslavia (Ball 105; Krkljes). This court ruled that many Serb military persons and politicians had committed genocide, and held “the political leaders of Yugoslavia accountable” (Krkljes; “Rep. Smith Introduces Resolution”). The Bosnian genocide had an impact not only on Bosnian politics but also on the politics of other nations. It was already mentioned that U.S. presidents George H.W. Bush, and Bill Clinton decided initially not to get involved in trying to stop the Bosnian genocide. Other ways the Bosnian genocide affected American politics are the following issues. About a decade after the Bosnian genocide, the U.S. Congress declared that Serb forces had committed genocide, and a member of the U.S. House of Representatives wanted the country called Bosnia and Herzegovina to create a constitution, which is a group of very important laws for a country, that would address and try to heal the effects of the Bosnian genocide (“Rep. Smith Introduces Resolution”).

The Bosnian Genocide affected the world’s economy by weakening Europe, especially Eastern Europe, forcing Eastern Europe to depend on Russia, and decreasing the chances of Eastern Europe joining the European Union. “Business people in Sarajevo say the economy will get a lift if Bosnia succeeds in joining the European Union, but European officials lament that progress is flagging because of infighting between the country’s regions, along with corruption and organized crime” (Bilefsky). So the business people in Sarajevo believed that the economy would improve if Bosnia joined the European Union, but the European officials said that the progress for that was slow because different peoples can not get along with one another and because of the amount of dishonesty and amount of the crime in the area. Another economic problem was the isolation of Bosnia which led to Russian investments and closer economic ties to Russia. Dan Bilefsky wrote about how Bosnia was dependent on Russia because of a shortage of supplies affecting over 100,000 families. Bosnia couldn’t do anything without Russia pitching in.

The Bosnian Genocide had many ethno-social consequences on the country of Bosnia and significantly decreased the quality of life over a short span of months. The oppressors decided to cut off the resources to the capital, Sarajevo, trapping the population and with dwindling supplies (Ching and Lowery 26). Like the Nazis’ “cleansing” Europe of its Jews, the Serbs’ aim was the “ethnic cleansing” of any Bosniak or Croat presence in Serbian territory. Human rights violations occurred in many different forms, including curfews, forced relocation, rape, castration, imprisonment in concentration camps, and killings. Journalist Mark Danner describes the Serbs’ plan of attack in city after city as follows:  Concentration, Decapitation, Separation, Evacuation, Liquidation” (Krkljes). With the mistreatment of the non Serbs, the culture, language and religion obviously dipped. Causing people to feel misplaced and needing to flee. Following, how poorly the victims of the Bosnian Genocide caused a serious outcry from the people of the surrounding region and world. Many people had to become refugees to escape the atrocities done to them and this caused a disruptive imbalance around the surrounding region and globally. “According to the International Center for Transitional Justice, from 1991-1999, about 140,000 people lost their lives and about 4 million were displaced as political refugees.” (Krkljes). Following the outbreak of news coming from Bosnia, the United Nations Council decided to create the ICTY or the International Criminal Tribunal for the former Yugoslavia, which was to prosecute anyone responsible with these horrendous acts (LeBlanc).

In conclusion the Bosnian  genocide impacted the world’s politics, economics and ethno-social dynamics. Bosnia is doing much better today. They learned from all the atrocities they had to face. The U.S. government also learned to get involved in foreign affairs before they worsen.