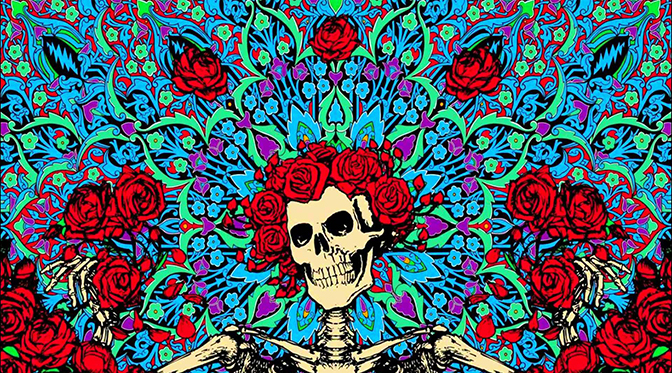 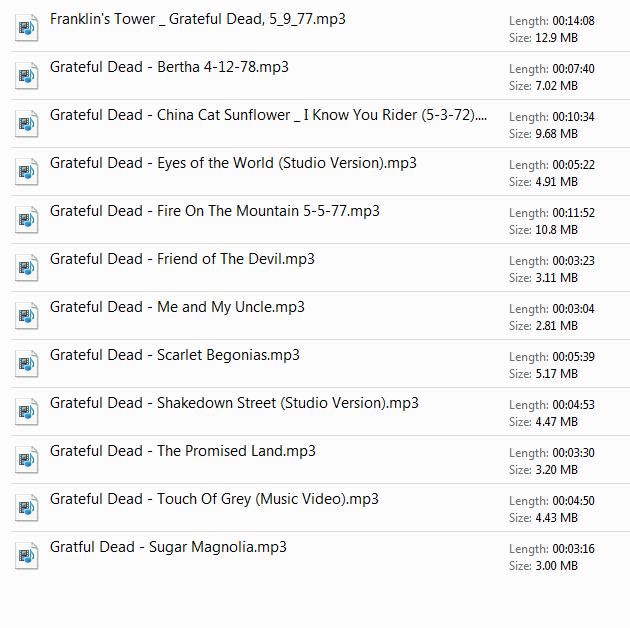 Franklins Tower- What the Dead were trying to say with this song I am unsure of, but I can find my own meaning in the lyrics. Particularly the chorus, “roll away the dew” resonates in my mind as a type of message to people about letting go of the past. To add to that idea of shedding the past, later in the song come the lyrics “Some come to laugh away their past”. I also can personally identify with the line “If you get confused just listen to the music play”. Hearing those words brings to mind times in my life when I felt lost and music helped me dig myself out of a hole. A reminder of how truly powerful music can be.

Bertha- Replace with Dark Star- Has been one of my favorite Grateful Dead songs since the first time I heard it. If you search for this song on the internet you will find countless different versions ranging in length anywhere from 10 minutes to more than 45. The band used the simple/original structure of this song as a basis for improvisation (playing music without a specific plan/coming up with it on the spot), and did something different with it every time it was preformed, taking it far beyond that original structure. To me, no two versions of this song sound the same, and after listening to so many of them, the possibilities of what could be done with it seem limitless. For good reason, the only album this song was released on (Live/Dead 1969) was completely live; there is no such thing as a studio version of this song. If there were, that would probably ruin it for me because there would’ve been set limits on it before they even started playing.

China Cat Sunflower- I don’t think I know anyone who avidly listens to the Grateful Dead and doesn’t like this song. This song doesn’t send a specific message to my mind when I listen to it, but it most definitely puts me in a better mood than I was before hearing it, arguably every time.

Eyes of the World – To me, this song is talking about the significance of each and every human being on this planet. Once again, I don’t know what the band’s intentions were, but when I hear the words “Wake up to find out that you are the eyes of the world” I feel like they are speaking directly to me (or you if you’re the listener), promoting the idea that my perspective (my outlook on things, how they’re seen through my eyes) has a direct correlation to my experience of this world. A hard concept to put into words, but is the meaning this song carries to me. When preforming Eye’s of the world, the Dead would often use their song “Estimated Prophet” to lead into it.

Fire on the Mountain – I really don’t know much about this song/where it came from, but I do know how relaxing of a song it is to listen to. I have read an interesting story about the band opening one of their shows with this song, while there was a forest fire blazing in the hills, within the crowd’s view.

Friend of the Devil – replace with Evening in Marin (Jerry Garcia & Howard Wales) – Although this song isn’t technically by the Grateful Dead, I included it because I find the side/solo musical efforts of the band members to be almost equally as intriguing/important. In the time of the band still being alive, although he wasn’t the only one doing it, Jerry’s side efforts were the most popular, or at least the most documented. Today, their music is still very much alive. Bob Weir tours with his band Ratdog, Bill Kreutzmann with his recently formed “Billy & the Kids” which I am pretty uninformed on, and Phil with Phil Lesh & Friends; “& Friends” because aside from Phil they aren’t always the same people.

Me & my Uncle – Although I am unsure of who it was, this song isn’t originally by the Grateful Dead. I am also not sure if this song had any particular significance to the band members, or if they had a deeper reason for playing it other than simply liking the song. They preformed it throughout most of, if not their entire career, the earliest I have seen being 1969, oldest being in the 90’s. I can’t say much more about this song other than that I like how the Dead played it (although I’ve never heard anyone else play it), and that the lyrics tell a story that brings to mind a cowboy/country western themed movie.

Scarlet Begonias – Similar to “Me and my Uncle” in the sense that the song tells a story. In contrast, this song was originally played by the Grateful Dead, but was later made popular again by a  reggae/ska band  called “Sublime”. I don’t have much more knowledge of this song than that; not particularly a favorite but definitely a good listen.

Shakedown Street- Although this has nothing to do with the meaning of the song, as the scene surrounding the Grateful Dead and their concerts grew, eventually a place known as “shakedown street” came into existence. Not an actual street, but a place outside of whatever venue they were playing where vendors would set up to peddle their wears/goods, however people did this long before their place in the parking lot got the nickname. This is significant because there were quite a few people out there who’s lives were centered around following the Grateful Dead around the world, and who’s funding for that came from selling food, clothes, or whatever it may be outside of the shows.

Touch of Grey- Probably the most famous individual song of the Grateful Dead’s, as well as being the most “mainstream”. I can appreciate this song and the lyrics, but at the same time I am slightly annoyed by it. Was one of the only GD songs to reach the top of those bullshit rating charts, which apparently attracted many “undesirables”. Touch of Grey came out late in the Dead’s career, around a time when there were a lot of newcomers on the tour scene, many of whom were disliked because they didn’t seem to truly be there for the music, and caused problems that had never been seen around the Dead and their concerts. These people became known as “Touch-heads”. From what I have read/learned these people saw Grateful Dead shows as a party/place to come and get messed up, instead of appreciating the music and embracing the sense of community surrounding/provided by it. Whether or not this song is actually responsible for the presence of people who weren’t true to it can’t be proved, but it would make a lot of sense.

*I personally think the lyrics in Grateful Dead songs send a different message to each person that hears them. I say this because if you read them, most of them don’t say anything definitive, but when I hear them being preformed they always seem to carry something significant that is hard to put into words.