On Sunday morning two officers were killed when an unidentified gunman open fire as the officers were eating at Cici’s pizza. The gunman proceeded to a nearby Walmart and opened fired, killing an innocent civilian. Police entered the Walmart from the front and rear entrances killed the gunman.

It comes as no surprise gun violence is growing in America with gun debate at full throttle the terror is still at full scale. Las Vegas has a high crime rate and even though it’s a wonderful place to visit its still a place where guns are on every corner. Unlike other states Nevada State law does not require the registration of firearms.

I recently had the privilege on two accusations to do a ride-along with my local police department.  It was an opportunity to not just see and learn what it’s like to be a police officer and the danger involved, but also to see the brotherhood the department holds.  It is one of the most valuable aspects I took form my experience.  They always look out for each other and that is why I myself wish to one day join that brotherhood.  During that ride-along I sat down with the officer for lunch just like the officers that were gun down Sunday.  Never did it cross my mind that something so tragic could occur. 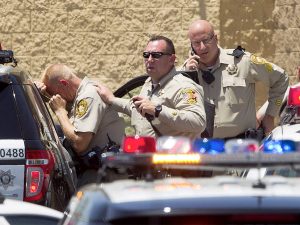 Guns don’t kill people. People kill people. Anyone with the right documents and following state laws has the right to bare arms.  But how are these safeguards really being enforced? There is no question Nevada gun laws should be re-framed after the tragic event of Sunday. But just because a law may change doesn’t mean that the crime will. The constitution allows the people to bare arms but it doesn’t give us the right to kill innocent people. We as humans have to really understand the danger of a weapon and into whose hands it may fall into.

I have great respect and offer sincere condolences to the families of the officers that lost their lives, and may they rest in peace.

For more information please visit the link below.