African Americans who contributed their culture and talents to the Harlem Renaissance wanted peace.  The big cities of the north like New York became places where the African Americans could share culture and come together.  They were leaving behind the share cropping poverty and the lynching racism of the south to enjoy free life and a new job that would give them cash. 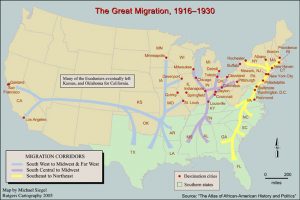 People in the city want enough money to live but they also want to get along while relaxing in the vibe of their culture.  The major religious culture of America was Christian.  The message of Christianity is based on getting along and moving on together so African Americans saw a message of forgiveness as they became Christian and finally experienced freedom.

Art described how they felt with the situations they were going through. They painted images of discrimination and not letting the African Americans have equal rights. Most of the African American were taught in a church but they weren’t allowed to go with the whites. This creates a space to share music and poetry with their own people.

African Americans had to deal with discrimination through segregation by sitting in the back of the bus and living in different neighborhoods. They weren’t allowed to enter pubs where they had ” no blacks allowed ” signs and they even had separate water fountains in some southern places as recently as the 1970s. Harlem is a place where they could get away from all the discrimination. Everyone respected music, poems and made everyone enjoy their life even through the discrimination at the time. Even the whites began to enjoy and appreciate black culture.  This is how jazz music and eventually rock music was born.

For further information on this interesting age in American History please enjoy the video below: