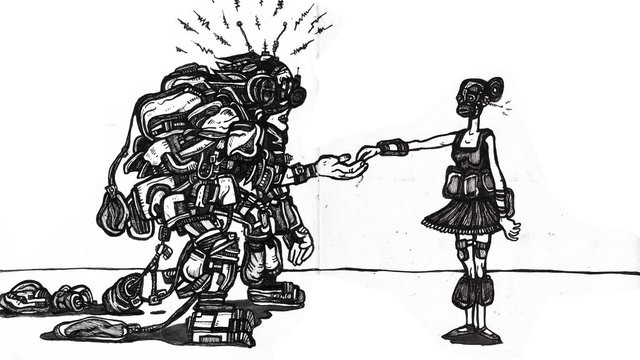 What should we expect in life and in our society; absolute equality or equity?   There is a difference.

How does this short story have a message about society?

If our society was absolutely the same like equality, I think it would look terrible because nobody wants to be the same as other people. We are proud of our differences.  We wouldn’t have competition; doesn’t everybody like a little competition because they want to earn what they have? For example, some people say I want to be better than him or her or I will show everyone what I can do even if I don’t have the same talent or ability. Right now in our society everyone is seeing life in a different way.  We have different ways of thinking; different opinions and viewpoints on the same problems.   In my opinion this is better if we have equity because it allows us to be different but also to work together in our differences.  Equity brings creativity and is more interesting than absolute equality.  Society needs teamwork and compromise not total equality.  It sounds like almost the same thing.  However, equity is talking about fair and impartial it also talk about being treated equal but we don’t have to be the same in the way that we think or look.

I think that this story has a message for the government. For example, freedom.  This short story talks about equality as a form of government sponsored extremism.  Extremism in the liberal form or the conservative form is dangerous.  It is extreme liberal to force equality, like how the world would look like if everybody is the same or thinks the same.  The story opens with this sentence, “The year was 2081, and everybody was finally equal.”  In this year of 2081, the culture values “equality” so much that people have become so complaisant that they agree to oppressive measures in the name of equality. What is interesting is that this extreme reality is impossible to achieve because of human nature.

Equality: The state of being equal or the same, specially in status, rights, and opportunities.

Equity: The equality of being fair and impartial despite differences and variety of ability.

Fairness:  impartial and just treatment or behavior with out favoritism or discrimination.

“You can tell who is the prettiest by how ugly the mask is, and how strong by the size of the weights. This is quite a reversal of standards. “That is the ugliest mask I’ve ever seen” and “My, what big weights you have” suddenly become glowing compliments.”

What’s the first thing you notice when you first meet someone? Height? Eyes? Smile? Something below the chin? Chances are it’s something visual. The world is a virtual smorgasbord of visual delights from beautiful people to sunsets to sleek electronics. Not in “Harrison Bergeron,” however. As part of their equality project, the government is regulating beauty as well.      https:g//www.shmoop.com/harrison-bergeron/summary.html