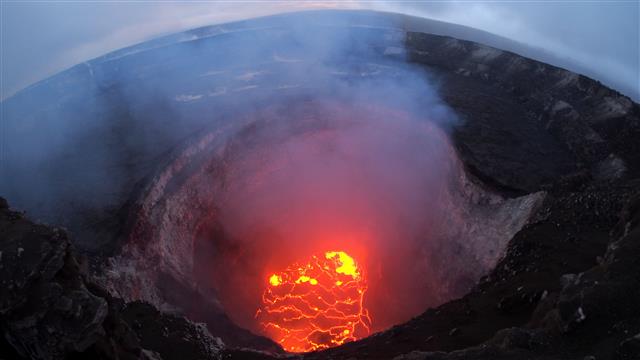 “The May 4, 2018, Mw 6.9 earthquake in Hawai’i occurred as a result of reverse faulting on the south flank of Kilauea volcano. On May 3rd, 2018, a M 5.0 occurred nearby the M 6.9 earthquake. About an hour prior to the M 6.9 event, a M 5.4 earthquake also struck in a similar location with a similar focal mechanism solution. Since the M 6.9 earthquake, 4 aftershocks of M 4.5 or larger have been located (all in the 30 minutes following the main shock”).

“This has been the largest earthquake in Hawai’i since the Ms 7.1 1975 Kalapana earthquake., which also generated a local tsunami that took 2 lives. Damage due to the 1975 earthquake and tsunami was estimated to total $4.1 million in Hawai’i. The 1975 earthquake occurred on a basal detachment fault, rather than in the shallower rift zone where recent activity has been occurring. Over the past century, 9 earthquakes of M 6 or larger have occurred around the Big Island of Hawai’i.”

The government evacuated all the people living near Kilauea volcano as a safety precaution.

Natural disasters are one of many things we can’t control and just have to be aware about. This last earthquake was very devastating. “Kilauea volcano is the main attraction of Hawaii’s Big Island, with nearly all of its two million annual visitors making a stop in Hawaii Volcanoes National Park.” They suggest that its not a good time for sightseeing.