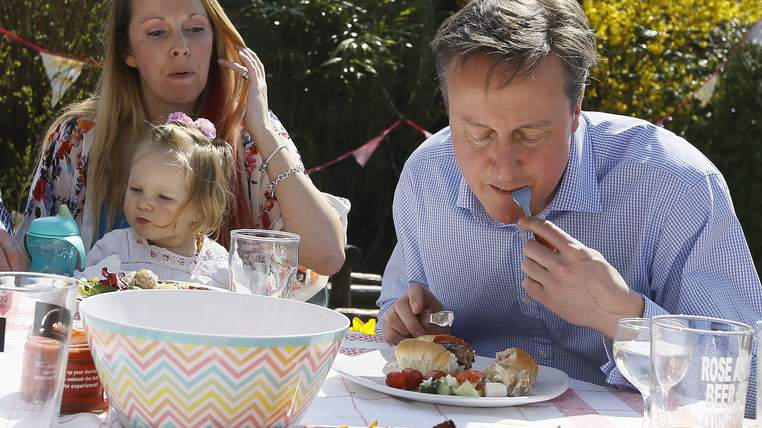 Across the water in Great Britain, elections for Prime Minister are coming up in May, and the current office-holder David Cameron is running to be re-elected. This past Monday, as part of his campaign, he went to what they call a “voters garden” where he had a meal and met/spoke with British citizens who have benefited from recent changes to their tax system. This all sounds like nothing but positive interaction between the higher-ups in the government and the citizens; and it was until he ate a hot dog… with a fork. With a FORK?!?!? Actually, there isn’t a problem with that at all, the guy can eat however he wants. It seems that where he did mess up was when he let the press in, who got plenty of photos of him eating his hot dog “wrongly”. The photo had reached the public, and ignited plenty of discussion/slandering over social media within hours.

The fact that I’m even aware of how someone, thousands of miles away, ate their lunch last Monday is quite annoying to me. Annoying, not because he used a fork, but annoying because the vast majority of people actually care about this kind of stuff. To me, this isn’t even news and I shouldn’t even know about it. The original article gave real examples of tweets, posts, etc. and from looking at those, there are a lot of people who care way to much. One of these tweets read “I’m sorry but I can’t possibly vote for someone who eats a bloody hot dog with a knife and fork!”. I’d like to ask that person, why not? What does his “improper” use of a fork say about him as a person, or how he will lead your country? Although you cannot tell how serious someone is speaking when reading text, I find it far more improper to completely change your opinions on the leader of your country over this, than it is to eat a hot dog with a fork. Its rather bothersome that this photo/his use of a fork could change the outcome of the election coming up next month. I think people who are bothered by the way this man eats should do some reevaluating of their priorities/morals… Possibly think for a minute and come to the realization that he is just another human being and his use of a fork is only being blown up because he has the label of “prime minister”.

What if I ate my hot dog with a fork, and someone posted a photo? Nobody would look twice because I haven’t been idolized by society.