H&M stores are being put on the spot 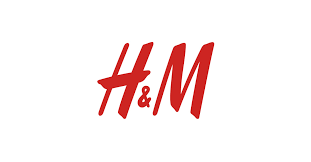 H&M is known as one of the top stores people tend to shop at. They have a variety of styles to choose from including kids clothing. This being said, they took the design’s overboard this time. An image, on the Swedish sites in Britain, was posted that was advertising a young African American child wearing a sweatshirt that had “coolest monkey in the jungle” label on the front of it. As soon as they put that out there it took a huge turn, many people were very disgusted and offended with this design. With it being disturbing and filled with racist undertones, it turned over to twitter which was abuzz with criticism from celebrities, journalist and social justice advocates. They all had a word to say about it. H&M had sent out an apology to not only the child modeling the sweatshirt, but to everyone else as well. There was another picture that was put on the spot, which was the little boy next to a white child who had a sweatshirt on that said “survival expert” this made a lot of people question what H&M’s intentions were?

“Woke up this morning shocked and embarrassed by this photo,” music artist Abel Makkonen Tesfaye, better known as “the Weeknd,” wrote. “I’m deeply offended and will not be working with @hm anymore . . . ” This was posted on twitter by just one of many very well known celebs.

Although many people are offended by this, there were people going back and forth about how it wasn’t H&M’s intentions. Many others also bring back the Dove soap Commercial which was an African American woman who took her shirt off and she was a white woman meaning it indicated she was “dirty” also very disgusting.

H&M has taken down the picture as well as the entire clothing line of the sweatshirts. 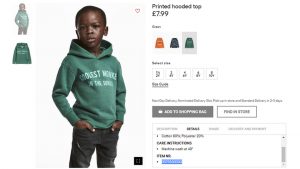 After seeing this ad, it was very disturbing to see. In today’s society mostly everything is very sensitive and taken very seriously. I agree that this was taken to another extent and they should’ve been more careful and had a thorough thought process with their designs. The African Amercian community had every right to be upset and taken back by this. It is more serious than just an apology from the store because after everything that has been happening with other races, it is hard to get over and just ignore this. Instead of the world moving forward it seems like we are moving back to the past. After everything that happened with this, H&M lost many customers.