How has Kavanaugh affected the public? A Young Journalist’s Eyewitness Account 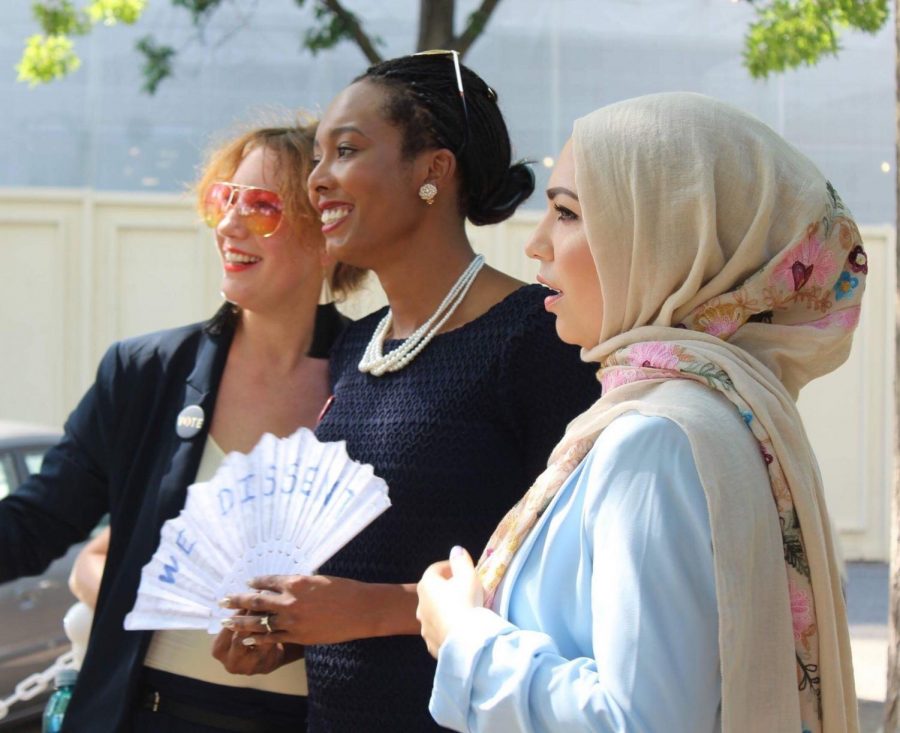 On September 5th 2018 the scene of  the nomination hearing of Judge Brett Kavanaugh for supreme court justice was surreal. Carla Beddbard was one of about 14 crimson robed women protesting outside the US Capitol and Senate Office building. The women are members of the civil rights movement known as “Demand Justice”.

What made you guys decide to choose handmaidens as a form of protest?

Her answer, The handmaidens are an iconic symbol that invokes the silence of woman. Using them in this manner to stand  against Kavanaugh it is a symbol of resistance.

What do you all want to accomplish by doing this protest?

We just want to be heard and raise awareness of Kavanaugh’s track record and how he isn’t suitable for supreme court.

How long have you been here and how long do you plan on staying?

What has been your biggest surprise while doing this motion?

Honestly, our biggest surprise has been the amount of support we’ve gathered from around the nation.

What has been your biggest disappointment?

We weren’t really disappointed with anything but we were scared. Members of Alt-right had followed us and threatened us, they even said “Don’t go anywhere alone.” One person confronted a handmaiden because he recognized her from another protest.

What’s one thing people can do to get a better understanding of why you choose the handmaidens?

Watch the show or read the book. It gets gruesome but it will give everyone a better understanding of the protest.

Outside the Senate building,a group that is pro-Kavanaugh confronted the Handmaidens and started yelling and tried scaring them. They didn’t let the hate stop them from standing up in what they believe in.

So Why is this particular supreme Court nominee such a threat to “liberty and justice for all”?

Kavanaugh has lied under oath, has kept secrets from the Government and would be

“A perfect nominee for a president with no clear relation to the truth.” https://www.nytimes.com/2018/09/07/opinion/editorials/brett-kavanaugh-confirmation-hearings.html

“Perhaps most concerning, Judge Kavanaugh seems to have trouble remembering certain important facts about his years of service to Republican administrations. …telling senators in 2006 that he had no knowledge of Mr. Bush’s warrantless wiretapping program or his detainee treatment policy — claims that have been called into question by yet more emails, which showed he knew about both of those things years before they became public. ”

How likely are the chances of Kavanaugh being confirmed into Supreme Court Justice?

Despite these odds or maybe because of them, the voices of protest were loud on both sides. “Most Republicans senators have quickly lined up behind Kavanaugh, who would surely swing the Court’s ideology to the right.Democrats have an uphill battle to sink Kavanaugh’s nomination. It would require all 49 Demoratic members to oppose Kavanaugh and for one Republican to cross the aisle. ”

Citizens young and old and of every ethnic background wait in line for tickets to watch the hearing. 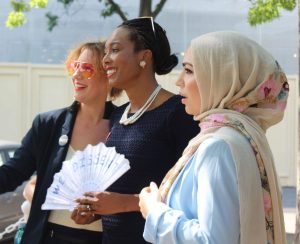 “Be A Hero” gave out t-shirts and tried to raise awareness for healthcare, “Refuse Fascism” was handing out stickers trying to get people on the side of #trumppencemustgo. In the line, they hand out tickets in groups of 20 and switch off every hour so everyone in the public gets a turn to watch the hearing. People waited for over an hour and the tickets cut off just before them, they wait for another hour before finally getting into the building, one group got inside just before they broke for lunch having them wait another 45 minutes. Some tried to sit for a minute to let legs rest, and were threatened to be arrested if they didn’t stand up, they saw it as another form of protest. After waiting for almost 3 hours the group finally gets inside to watch the hearing. This woman (who happened to be in a wheelchair for her broken ankle) was in the hearing with said group. 15 minutes into the meeting while talking about Kavanaugh’s answer to a question from a 2006 case regarding McCains “Detainee Treatment Act” she yelled, cutting Kavanaugh off saying “Disabled people have human rights! We can make our own medical decisions!” She was wheeled out of the building and arrested. 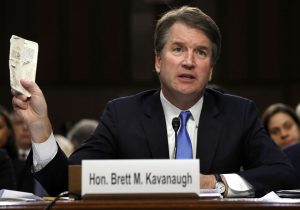 Kavanaugh has brought out the best and worst in people, some trying to stand up for their rights and others threaten to take them away. Some people didn’t feel safe because Alt-right made remarks to them. Some people fainted due to the heat and still watched the hearing, others brought to the hospital. All for keeping a hold of their rights as citizens that just might be ripped away if Kavanaugh is elected.  While we do indeed have a system of checks and balances where no single man makes up the views of government; this nominee for Supreme Court has potential to tip the scales of justice towards a socially conservative majority in our nation’s highest court.