How Old Is An Adult? The Debate Over Age of Majority 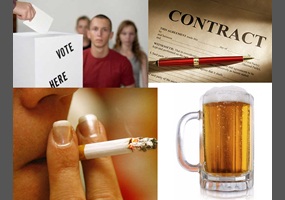 Eighteen. A milestone for young adults across the country. This is the age a teenager officially is considered a legal adult. Teens are suddenly completely legally responsible for themselves, but they don’t get all the perks of that age shift yet. To discuss current age restrictions and how they came to be we need to understand what created the belief that the age of eighteen is the right age to become an adult. Unfortunately the reasoning seems to be pretty arbitrary.

The age of majority isn’t based of the age of maturity, as scientific research points to the brain maturing much later, between 26 and throughout your 30’s.

Studies demonstrate that the adolescent brain continues to mature well into the 20s. This has prompted intense interest in linking neuromaturation to maturity of judgment. Public policy is struggling to keep up with burgeoning interest in cognitive neuroscience and neuroimaging. However, empirical evidence linking neurodevelopmental processes and adolescent real-world behavior remains sparse. Nonetheless, adolescent brain development research is already shaping public policy debates about when individuals should be considered mature for policy purposes.

It isn’t very clear why the United states has set age restrictions based on an unrealistic expectation of maturity.

The age of eighteen was not the original age of majority in the United states nor was there any age restriction on certain activities in the past. In colonial times it was not uncommon for girls to be married and sometimes having children at as young as twelve years old. The United States eventually caught up and set a limit on marriage age, but as it is up to the individual states to decide the age and the exceptions that the age to marry can lie anywhere between sixteen and eighteen. It creates a bit of confusion when in one state your marriage is legal but in the next one over it is a crime. The age of maturity also has had effects on society in a nonlegal sense. A couple decades ago it was very common to live with your parents not until you were a certain age but until you were ready and financially stable enough to start your own life well. But these days societal views have shifted to believing staying with your parents once you are an adult is seen as sad and lazy. So with the ever-changing laws and societal views on adulthood, when can you really be considered an adult? Most people would say when your mature enough to care for yourself well , but when the law states its a certain age is it really fair?

In other countries the age that constitutes adulthood varies based on cultural and societal views. Some countries do not have a legal minimum age for adulthood as the religious customs dictate when someone is considered an adulthood. In some countries this is based off of physical maturity or when they are considered marriage age. This seems like a poor way to measure adulthood as humans reach physical maturity much sooner than they do mentally and emotionally. Some countries have a system almost in direct opposite to that. Again this is entirely based on cultural customs, for example in Germany, where drinking alcohol, more specifically beer, is very common and considered a social norm to have a beer with dinner. Another country with a similar social view on alcohol is France, where wine is extremely popular. In these countries its common for teens to have alcohol at dinner with their parents, and the drinking age is much lower, set around 18 instead of the strict 21 of the United States. Allowing teens to drink alcohol, even at dinner with parents may sound irresponsible, however the idea these teens are raised on is that alcohol, at least wine and beer, is simply a drink to have with dinner or in the evening, and this takes away a lot of the mystery and thrill of drinking that exists rampantly in the United States. The cultural views on alcohol in these countries may actually be beneficial because it eases teens into drinking and takes away the thrill of illicit drinking, preventing teens from binge drinking the day they are legally able to, which helps avoid many of the bad choices made during heavy alcohol consumption, such as drunk driving, where teens can be permanently injured or even killed, or spend time in jail with the weight of having harmed or killed another person. The practice of easing teens into the privileges and responsibilities of adulthood seems to be more successful at helping them manage those things.

The American government has a spotty and troubled past with age restrictions. During the Vietnam War, the voting age was 21, but the drafting age was 18. The US government was forced to lower the voting age after protestors insisted it was unfair to be forced to fight in a war they could not even vote against. Our history of age restrictions seems to have caused some problems over time, and many young Americans face significant struggles with adulthood because in society there is not a gradual transition into adulthood but instead a sudden jolt. Hopefully we as a society can make changes to help ease you adults into adult responsibility, before a generation is lost in the confusing world of adulthood.