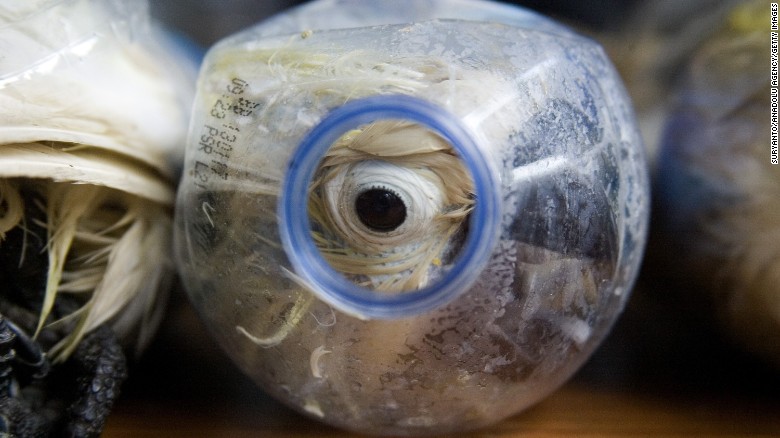 On May 4 of this year 21 birds (cockatoo) were rescued by the Indonesia police. When the police stopped a boat during an operation  searching for illegally- trafficking animals and they found 21 cockatoo inside of 1,500 ml plastic bottle water.
“The birds were still alive then but some were already very weak,” Lily Djafar, spokeswoman for the Tanjung Perak police, told CNN. The Yellow-crested cockatoos were classed as  critically endangered by the International Union for the Conservation of Nature and Natural Resources in 2007, this specie is the most trafficked in Indonesia. But this is not only animal that is trafficked. In April, there were two cases of animal smuggling at the port and more than 200 rare and endangered animals, including birds of paradise, reptiles, sugar gliders known locally as tupai location and cockatoos were seized.A report by Indonesia’s Natural Resources Conservation Agency (BKSDA) a few years ago said that the population of these species were critically low due to illegally hunting.
All the organizations who are fighting to protect these animals are worried because they are in disappearing due to deforestation and their low reproductive rates.
“There’s a lot of demand for parrots and cockatoos in southeast Asia and Europe,” he said. “They could well have been destined for markets there, although obviously it’s illegal for wild-caught birds to be exported.”
I think the government is not even trying in making any punishment for those who violate the national law of trafficking animals that are endangered. These international organizations can’t fight alone they need the enforcement of laws of the home country of these smugglers and of the country of the items being smuggled..