On June 2nd, Iraq’s international partners vowed to remain united in the fight against ISIS in Iraq and Syria.

Members of the U.S.-led international coalition against ISIS met for the conference in Paris against a backdrop of recent gains for ISIS in Anbar province, where the militant group seized the key city of Ramadi last month.

“We have made real gains in the nine months since this coalition came together,” he said. “Daesh controls 25% less territory than it did when this first came together and it has lost significant numbers of men and material and we have proof of concept that what we’re doing works, around al-Asad, where we’re present, and in the north with the Kurdish forces.”

The above link is a timeline if ISIS spread in Iraq.  The photo below shows Iraqis inspecting  a mosque that was bombed by the Iraqi air force seeking to root out ISIS in the city of Falluja on May 31st. 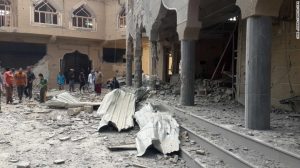 ISIS needs to be stopped.  I can see how taking them down would require some teamwork and a lot of patience. They continue to grow stronger and bigger in numbers. Many choose to join them in resort to their power and land that they now own, but are blind to see that many surround ISIS with hate for them because of all the humanitarian crisis and deaths they have committed since the start of their appearance.

Many countries have promised Iraq support but it has received very little, he said, while Iraqis are “shedding their blood” to fight back. 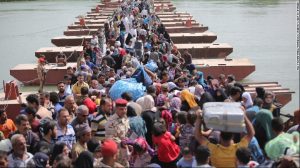 In the photo above; Iraqi citizens are fleeing ISIS across a floating bridge from the city of Ramadi.

If many complain about why ISIS has not been terminated, then you should begin to watch the news and see how one can support. To get a basketball team going you must work as a team to beat your opponent which in this case is ISIS and whoever may support them.