Into the Wild is a book and movie based on the true story of Chris McCandless. It is a story that makes you think about what really matters in your life and what is a manifestation of modern society. It also makes you think about yourself and if you think you would be capable of leaving all of your material possessions and living off the land. It shows the divide between people who agree with McCandless, and the people that think he was crazy.

Both the author and the director of Into the Wild have their own views of McCandless, just as the people in my class did, but, I think their view of McCandless is one of wonder because they were fascinated enough with the one news article they saw for Krakauer to write a book and then for Penn to direct a movie on McCandless’ story. I think whether you agree or shun McCandless’s decision to leave society every single person looks upon him with a sense of wonder.

One of the biggest questions of the whole story is why McCandless decided to leave his lavish life for one of uncertainties, but also of freedom. I think he left his identity, and lifestyle, because everything he had done in his life made him unhappy, like college, and didn’t want to face the name associated with his parent’s hardships and abusive relationship. I can relate to McCandless because I don’t understand the cooperate routine that is forced upon everyone and would like to go into nature and be more relaxed, but not to the extreme that McCandless took it.

Mental illness is what the majority of people blamed for McCandless’ drastic behavior,and I think McCandless was slightly depressed and had some sort of PTSD from his childhood, but I don’t think that it was that great of a force on him. I think McCandless’ was driven by a greater force because he wanted freedom, and to look back on his life and feel no regret, not because he was depressed.

There is a quote by Thoreau that describes McCandless’ attitude towards life and his hesitations about living the typical white collar life.  It says, “I went into the woods to live deliberately…”. McCandless’ biggest fear was to look back on life and realized he hadn’t lived while he was alive, which the quote described perfectly, also he thought the best thing to do was go into the wild, as did the author of the quote.

At the end of the story I think McCandless finally realized that he shouldn’t have abandoned everyone, but he should have surrounded himself with better people. He probably didn’t realize that he should have stayed with Rainey or the Mr. Franz until he was almost dead and all alone in the middle of the Alaskan wilderness. I believe that we should take that lesson and surround ourselves with good people and do what makes us happy, since McCandsless seemed so much happier when he was traveling and doing what he wanted. 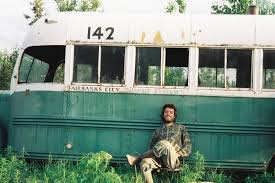