Is Medical Marijuana safe for children? 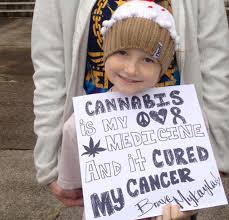 Mykayla Comstock is 7 years old and was diagnosed with acute lyphoblastic leukemia in July of 2012. Mykayla and her family live in Oregon where Medical Marijuana is legal.  Her mother who is a an advocate for medical marijuana , has been giving her daughter one gram of oral cannabis oil everyday as a part of her treatment.

Her doctors suggested a bone marrow transplant, but while she was still using the medical marijuana she went into remission in August. She continues to rely on cannabis to cope with the pain and nausea. Her mother plans to continue giving Mykayla Medical Marijuana during the additional two to three years of chemotherapy she still faces.

Experts like Igor Grant of the University of California’s Center for Medical Cannabis Research warn that the effects of the drug on child development are unknown. But its the same with other medications used to fight pain and nausea that are currently given to children with cancer as well as powerful anti psychotic drugs that are used in long term treatment of childhood mental illnesses. Opioid drugs like morphine and Oxycontin which are sometimes used to treat the pain that comes with cancer and other diseases can cause overdoes or form an addiction.

Although Marijuana can be addictive to a certain point, addiction rates are lower than those to opioid drugs. Usually when you stop taking these opioids it is followed with severe physical withdrawal which is not seen with marijuana. Marijuana can reduce nausea and vomiting which is a frequent problem for cancer patients  as a side effect of radiation chemotherapy.

I found this article very interesting because the Medical Marijuana Mykayla was using along with her treatment and how well it worked.  The Cannabis worked tremendously well to ease the side effects that come along with the chemotherapy and other medications she takes.  I personally found it odd that oxycotin,  morphine, and drugs along those lines are looked at as more acceptable or have more of an impact. Usually with opiods a bad reputation follows because  these drugs are extremely easy to become addicted to or abuse them. While opiods can cause nausea and vomiting, marijuana has properties that reduce these effects. I am happy Mykayla found medicine that will allow her to feel better and enjoy her childhood and really be a kid.