Is Oprah mulling a 2020 presidential run? 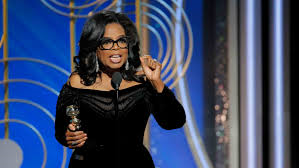 After the Golden Globe awards, many people were going around saying Oprah Winfrey was actively thinking, and could possibly run, for in 2020. Progressives have spent much of the last two years lamenting the idea of the billionaire TV star sitting in oval office. Everyone clearly knows Donald Trump has repeatedly demonstrated himself to be a narcissist with no interest in learning about the nuances of policy, let alone government. Oprah deserves her own category for most things in life and this is no different. Oprah is her own person and she has such a great ability to connect with people and the walks of their lives and be able to help them throughout everything one goes through. Donald Trump has built buildings meanwhile Oprah has built our shared values and humanity through the scaffolding of her voice. Donald made money, yet Oprah made a difference. Oprah’s story reminds us all what is possible or should be possible for everyone in our country.

During the Golden Globes speech, Oprah knows the unique power she represents. “it is not lost on me that at this moment, there are some little girls watching as I become the first black women to be given this same award” Oprah said.

I feel people only think she could be president because she was saying things that were very true. Many people could relate to what she was saying throughout her speech. I doubt she will really run for president although she makes valid points. It’s a free country she can run if she wants, but if she runs the idea of Trump- Oprah throw down will make the news media positively vibrate with glee. We should all be skeptical unless and until she shows us why, beyond just being rich and famous.