If you get shot, or if you get killed, It’s [heaven] straight away.
ISIS has taken the blame for the brutal attack outside a Prophet Mohammed cartoon contest in Texas. They are threatening to attack again. On Tuesday, the terrorist group said Al Khilafa(Al Khilafa is how ISIS refers to it’s soldiers). “Soldiers” opened fire outside an event in Garland. Investigators are trying to link Sunday’s shooting to international terrorism. 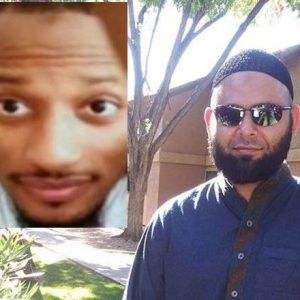 “We say to the defenders of the cross, the U.S., that future attacks are going to be harsher and worse. The Islamic State soldiers will inflict harm on you with the grace of God. The future is just around the corner.”

The image above is satire as it points out the fact that many Muslims see the depiction of their founding Prophet as blasphemy but also speaks to the likely respect the Prophet had for Jesus as a Prophet.
The values of authority, power, and life. The authority that the members of ISIS have displayed over the lives of people is dangerous. The power that they have over people they recruit have portrayed a dominating and intimidating sense of fear to citizens who are of a different religion. Life is in danger, especially those who do not follow the beliefs of ISIS. The two men who were able to carry their guns put many lives in danger.

I believe that the “grace of God” ISIS speaks of has severely corrupted and perverted the image of God. It is sin and the desire for power that continually deceives individuals, and puts them off to the true potential relationship they could acquire with the divine. The followers of “the cross” have developed an accumulated hate, in the eyes of ISIS. It is not God who is fallen, but man. The discrimination human beings have toward one another continually downcast the true intentions of what man was created for. To glorify the unity, peace, and love of our creator.

I think unification in a world of different ethical values would greatly change the outcome of our future. I personally do not support gun rights laws and believe that guns simply de-sensitizes the precious value of life. Experiencing the suffering of others through media has numbed our societal apathy towards the bigger issues.

Why did the people participate in the drawing contest, when they knew any visual representations of the prophet Muhammad was an insult against Islam? How does hearing about death in the news change the value of your own life?