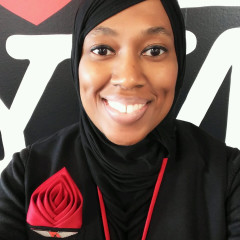 Charee Stanley, a Muslim flight attendant, says ExpressJet suspended her for refusing to serve alcohol, which is against her religious beliefs. Photo: courtesy of CAIR-Michigan, via USA Today

In late August,Charlee Stanley was placed on administrative leave for refusing to serve alcohol. Two years ago, Charlee converted into a Muslim which prevented her from serving alcohol which was one of the many tasks she had to do for her job. In June, she had asked her supervisor if it was possible if one of her colleagues could serve alcohol while she did everything else, in response she was told yes. All was going well until early August, when an airline employee filed a complaint stating that Charlee was not doing her job when refusing to serve alcohol. The airline employee also called attention to Charlee’s “headdress” and her book she carried with “foreign writings.” Then in late August, ExpressJet (the airline Charlee worked at) told her that “it was revoking its religious accommodation of excluding service of alcohol from her duties.” She was then put on leave without pay for 12 months, after which her employment would then be administratively terminated. Now, she is filing a federal complaint saying that ExpressJet has violated Title VII of the Civil Rights Act of 1964, which prevents employers from discriminating employees for religious reasons. The Equal Opportunity Commission (EEOC) has six months to make their judgement.

Since the attacks of 9/11 there has been many times Muslims have felt discriminated by airlines. Unfortunately, racism has always been a big deal here in the United States. I don’t know if we’ll ever have equality but I could say that we always will stick up for ourselves which shows that we are strong and we all have voices.