“I’ve been to the mountain top” 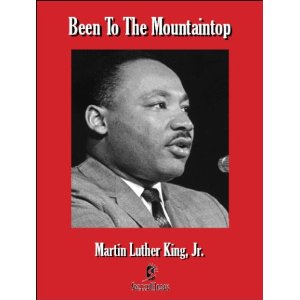 “I’ve been to the mountain top” is a very inspiring speech Dr. Martin Luther King Jr. gave on April, 3, 1968.  He would be killed by an assassin’s gun the next day in Memphis, Tennessee.  Many people know him as the man who “had a dream” although that’s the main reason people know him. For a particular reason knowledge of this speech and his death the next day opened my eyes more to realize how much pain and suffering the African American people were put through. Even after all that, they still didn’t rebel in any violent way.  “We have some difficulties ahead but it doesn’t matter to me anymore because I have been to the mountaintop!” Democratic American society is most inspired to act positively when we see a hopeful future, when we see what we are saying yes to; it is one thing to protest but more important to say yes to a better alternative. This hope is what allowed Martin Luther King to remain non-violent even though it did not prevent others from acting with violence against him.  His life and death made him a modern American prophet.

What does this mean to me?  I’ve been influenced by this speech and his life. Even after everything the American white man’s culture did, Martin Luther King would only enlighten everyone to be strong and rebel by going on non-violent strikes. He always had faith and positive attitude. My thought is that his religion always helped him realize that there was always gonna be light at the end of the tunnel. The ending of his speech has everyone happy and full of faith with these word”mine eyes have seen the glory of the coming of the Lord”.  These are the same hopeful words of prayer that were sung by Americans during the time of the Civil War and it took 100 years of struggle to get to Martin Luther King’s message.

The way this speech ties to what we have been learning in class is that Abe Lincoln was another American leader who would not necessarily always want violence as the solution to things.  President Lincoln wanted to preserve the Union at all cost and he too became the victim of violence but his message echoes today for American justice. Also King just wanted to end segregation and slavery which had always been a social cancer in American history.