Jackie Robinson; All I ask is that you respect me as a human being. 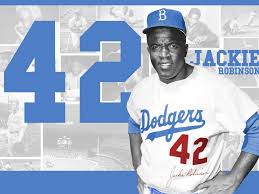 Philadelphia Tribune; How much do you know about Jackie Robinson?

The text below is a creative writing exercise. This is not an actual interview it is one based on research and imagination.

Mr. Jackie Robinson, it is a pleasure to have this opportunity to speak with you.  You are an inspiration to many because you were so brave when the Brooklyn Dodgers asked you to be the first African American baseball player.  Racism was common in America and many people wanted to keep white and black people separated. There have been many times in my life where I have been afraid and I admire the many times you showed courage and accepted the challenges of life.

Mr. Robinson, can you tell me how your early life helped you to become this strong example for others?

I was lucky enough to have parents that cared for me and siblings that made sure I did the right thing. I was the youngest of five kids and even though we didn’t have much money, we all had a sense of family. I was born in Georgia, but we moved to California after my father left. I was born on January 31, 1919 in Cairo Georgia.

Mr. Robinson I have had to move to different places in my life and I know how challenging that could be. Can you share what was one of the challenges you faced?

When I was the only African American playing major league baseball many people treated me unfairly and disrespectfully. My family was threatened and I was not unable to stay in the same hotels as my teammates. Some of the other players would deliberately run into me with their cleats and say racial comments about me. I had agreed with the manager Mr. Branch Rickey that I would be respectful and show self restraint. It was really hard to do when I was being treated so poorly. Eventually it got easier because more and more of my teammates started to accept me and be my friends.

I know when I accomplish something that I think I couldn’t do such as getting good grades in my classes that I feel very proud of myself.

What accomplishments are you most proud of ?

I did a very good job playing baseball and helping my team to win many games but I am most proud of the way I conducted myself which helped make it easier for other African Americans to play major league baseball. Because I could control myself, more managers were willing to draft African American players. If I had acted in anger at my treatment, this may not have happened as soon as it did. It was a big sacrifice for me and my family but in the long run I think I helped bring about more equality in America.

My philosophy is that I know in my life it is hard to keep working on difficult tasks but I know that is the only way I am going to accomplish what I want. It is clear you also had to keep trying to have self control even when you were afraid or discouraged. What advice would you give to Americans today?

I would say to people today learning self control and never giving up are maybe two of the most important lessons to learn. The world is full of challenges and people who have different ideas and we have to set an example of truth but we have to learn to treat people with respect. I tried to do this in my life. “I’m not concerned with your liking or disliking me. All I ask is that you respect me as a human being”.