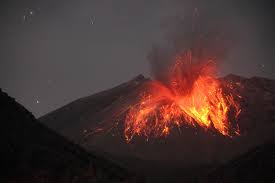 Tokyo (CNN)Residents of the Japanese island of Kuchinoerabu have been urged to evacuate to get out of the path of an erupting volcano.

Mount Shindake, located in the center of the island, erupted shortly before 10 a.m. local time, the Japan Meteorological Agency said.

A few minutes after the volcano erupted, the agency raised its eruption-alert level from three to the highest level of five.

Pyroclastic flows have reached the island’s shore and the municipal government has issued an evacuation order to all of the island’s 137 residents, officials said.

Kuchinoerabu Island is 130 kilometers southwest of Kagoshima city in the country’s south.

This story has to do with the government because they are the ones who had to evacuate everyone.  The democratic values here are life and property. Life because all the citizens lives were in danger. And Property because all the damage that was done to citizen property by the flowing lava.