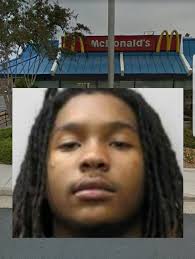 Last month, a teen at Chantilly, Va threatens to kill employees at McDonald’s because they took a long time with the food.

It’s been said, when their food order wasn’t ready in time the teens began to argue, prompting one of the suspects to pull up his shirt, showing a gun sitting in his waistband. According to a Fairfax County Police statement they threaten to kill the employees.

This incident is hardly the first time hungry customers have become violent at restaurants, and makes citizens question their safety. “Our laughable, shameful system of gun regulations is propped up only by romanticized and dishonest arguments. It’s always the same set of excuses: the Second Amendment, personal protection, recreational use, fear of a police state, and a general call for freedom”.

“For to be free is not merely to cast off one’s chains, but to live in a way that respects and enhances the freedom of others.” He was talking about freedom from oppression and discrimination, but the sentiment applies to so much more.

If all residents of a community or country are not free from the terror of gun violence, then the romanticized freedom of gun ownership is a false freedom.