Liberty or Death? Which Would You Choose? 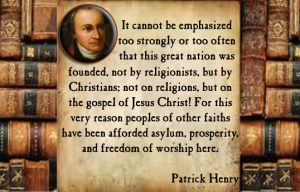 PATRICK HENRY
Born May 29, 1736 in Hanover County, Virginia
Protested British tyranny
Symbol of American struggle for liberty
Served in the Virginia House of Burgesses and the Continental Congress
Five-term governor of Virginia
Delivered the famous “Give me liberty or give me death!” speech.
Died June 6, 1799 at Red Hill Plantation, Virginia

In the summer of 1765, The Sons of Liberty, were rallying Patriot support against British taxes such as the Stamp Act. Patrick Henry was a leader for the Virginia division of the Sons of Liberty. In October of 1765, Delegates from nine colonies met in New York City. This delegation was known as the Stamp Act Congress. It was one of the first times that separate colonies acted as one. They proposed a boycott on British Imports, and stated that there would be no taxation without representation. The Stamp Act was repealed in March 1766, but it was replaced by the Royal Declaratory Act. Within a year new indirect taxes were passed by Parliament, these were known as the Townshend Acts. Due to leadership such as Patrick Henry, there would be no backing down by the American Patriots.

http://www.history.org/almanack/people/bios/biohen.cfm  ( listen to his speech )

It takes a strong person to stand up and fight for something that no one else is willing to fight for.  It takes a strong person to name injustice and bring it to public attention… Patrick Henry is that person. Patrick Henry stood up to the Monarchy of England and the British Parliament to fight for freedom. In the end, because of his leadership, he was not the only one standing up.

American History has proclaimed liberty but has never perfectly guaranteed it for all. “Give me liberty or give me death” was proclaimed by a white male property owner with political authority but it foreshadowed the coming of a civil war that emancipated generations of slaves.

Do you think America is living up to Patrick Henry’s ideals of Liberty today?

Is there anything that you would be willing to die for?