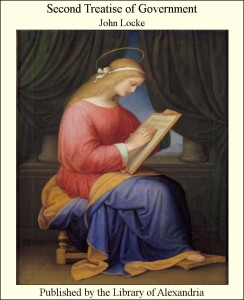 The Second Treatise of Government by English philosopher John Locke was written in the later 17th century as England was becoming more democratic.  During this time the American colonies were growing in size and in their economy as part of the British empire.  Locke’s writing became popular as the American founding fathers were being educated in the Enlightenment time period of the 18th century. The time period when Locke’s ideas were being noticed by American colonists is also known as “The First Great Awakening” when Christianity became more democratic.

It’s An Essay about the purpose and limits of government power.   It continues to be an extremely influential work that helps form better democratic republican political philosophy and provides a basis on the traditional political policy we have today.  Thomas Jefferson; a Virginian who wrote the Declaration of Independence in 1776 and became the 3rd U.S. President in 1801, was greatly influenced by the Natural Rights philosophy of John Locke.
The Second Treatise is one of the most influential political theories ever published. It has been an influence on the American and French revolutions and its ideas form the core of the subsequent centuries’ political dialogue about the nature, ends, and limitations of civil government. What is most striking about this is that Locke never acknowledged it as his work during his lifetime (only in his will). During his lifetime he was known primarily as the author of An Essay Concerning Human Understanding; this work secured his intellectual fame and the prominence of his later published work.

John Locke published the Second Treatise in 1690. Two years earlier, in 1688, the very unpopular King James II had been exile in favor of King William the III and his wife Queen Mary in the Glorious Revolution, with the help of a group of noblemen known as the Whigs. Locke, though not living in England at


the time of the Glorious Revolution  had strong associations with the Whigs, and sought to justify the ascension of King William (in fact, the Second Treatise was written to justify resistance to king Charles II, but was published as a defense of William’s Revolution). The Treatises were written with this specific aim–to defend the Glorious Revolution. Locke also sought to refute the pro-Absolutist theories of Sir Robert Filmer, which he and his Whig associates felt were getting far too popular. Although not as immediate a challenge, Locke’s work also serves as a major counter-argument to Thomas Hobbes’ Leviathan, in which Hobbes argues in favor of absolutist government to keep people from abusing property and privacy. Many persistent splits their opinion on political theory today from the fundamental disagreements between Locke’s Second Treatise and Hobbes’ Leviathan.
The most most important thing that John Locke achieved was to let people know the basic concepts of human nature and representative government.  In a Social Contract government people are ruled by government and people also have the right to “alter or abolish” the government if it is unjust. For a long period of time, people have failed to do the last part. Civilians of each kingdom, empire, nation have not realized the fact that the power of all the people must come together in compromise as a  much much stronger government than any monarch, faction, military group, or dictator. When people suffer tyranny and abuse they often think they really have no power over government, but this article has shown the power of the people known as popular sovereignty.
Delete Image
Align Left
Align Center
Align Right
Align Left
Align Center
Delete Heading