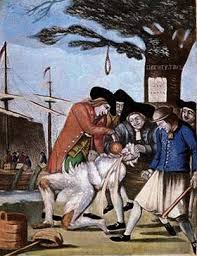 This a picture of colonists giving a  punishment to an innocent tax collector tar and feather in and force him to drink hot tea. Pine tar could be hot enough to injure someone, colonists did this because they were to furious at the king. The king put taxes just to the 13 colonist because he helped win the Indian French war. This was an emotional action that the people took againt the people who goes in fovar the king   People were really angry that they decided to form a revolution againt the king. The result of that was the indepence from England.

It took a a very long time for the new america to make progrese as an ideal government. People decided to be  independent from the king because patriots did not like taxes,  but to make  progress the country needed to collect taxes. People still did not like paying taxes, but we need it to run  the government. Today the United States is a big and strong nation because citizens pay taxes.