McCarthyism was a campaign that was against alleged communists in the US Government and other institutions carried out under Senator Joseph McCarthy. McCarthyism was popular between 1950 and 1954. A lot of the people were accused of communist sympathies and were blacklisted or lost their jobs. Most of the accused did not even belong to the Communist party.  In many instances there was no evidence or proof to support the case. 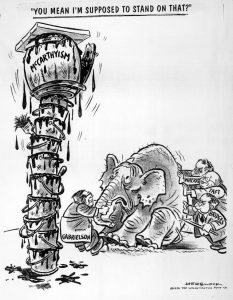 Once McCarthyism started to take it’s toll, the Senator himself became chairman of the Senate Committee on Government Operations. After that, he was granted the power to investigate anyone and everyone because of suspicion. He used severe intimidation and threatening to get his information. None of this was private either; all of the witnesses and suspected people’s names were released publicly.

I think McCarthyism is a disgusting government fear tactic but I can definitely still see it in society today. Tabloids and magazines are obsessed with making things up just to sell. Although it’s a completely different concept, it still has somewhat of the same effect. It’s a horrible way to get a story and people are too money hungry or even power hungry to have morals when it comes to it. Although McCarthy was feared and eventually ridiculed, people accepted it because they couldn’t do anything about it and they were victims of the fear propaganda of the Cold War.