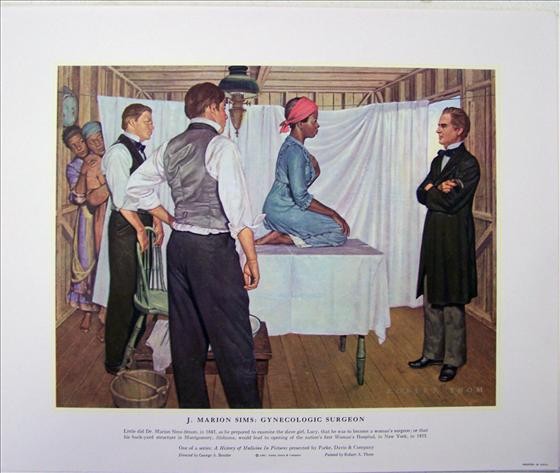 Times prior to the Civil War researchers found evidence of slave experimentation in Virginian Medical Schools.  The history of human experimentation is an old practice of medicine, targeted to the disadvantaged and vulnerable population.    This occurred in places like in Antebellum Virginia.  In the Old South there were few physicians so those who had limited or no access to professional medical care relied upon self-help manuals written by commercial medicines and or homemade remedies, folk beliefs, conjuring, and superstition to help with medical needs.  In the absence of trained physicians, non-professionals such as masters, used mistresses and the enslaved as an instrumental in providing medical care in the south.  In the 1800s hundreds of Thomas Jefferson’s slaves were inoculated with small pox to test the safety of a new vaccine.  Dr. Thomas Hamilton placed slaves in an open-pit oven with only their heads above ground; to determine which medication would allow a person to stand high temperatures.  Meanwhile slave remains would be dug up and sold to the medical schools where students’ dissected what was left.

During the Antebellum period, theories of differences in physiology and medical needs of men and women and whites and blacks were being explored.  A man named Dr. Samuel Cartwright believed the size of African American’s brains were a ninth or tenth less than other races.  Another dubious theory was called “Drapetomania” which was a mental disease that caused slaves to run away from their owners.  It’s obvious that the only person with a substandard mentality are the physicians during that time.  Other methods used for ridding slaves from illness were things like depletion in other words draining the body.  This included heavy bleeding, vomiting, and sweating.  A substance called calomel was given to patients; a chemical compound made up of mercury chloride.  They used this method on children and adults.  Rather then curing the body it increased the likelihood of death. 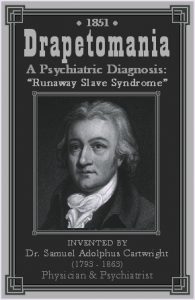 As I read through different journal entries and topics such like this I always get a little sick to my stomach.  Those were my people, my blood lines only four or five generations ago.  My great grandmother is still alive and she is 96 years old born in the 1920s.  She was born in a time when the Ku Klux Flan reigned in the south with their lynching of blacks and targeted hatred against all minorities such as Catholics, Jews, and new foreign immigrants.  By the time my great grandmother was a mother raising my grandmother in the 1950s she was faced with the rough road of integrating public schools in Washington D.C. The supreme court officially started to desegregate schools with the ruling of Brown vs. Board of Education in 1954.  I may not have been born during these era’s but learning about my history makes me feel so enraged and the emotions I have from what happened to people of color remain very fresh to my memory.  We have suffered a tremendous loss of soul and roots.  Yes, it is true that we’ve come a long way and things have gotten better, but we can do so much better.  There is work to be done.  We must not let our emotions get the best of us but use them instead as motivation to keep society moving in the right direction.

Links to look at and sources of research: