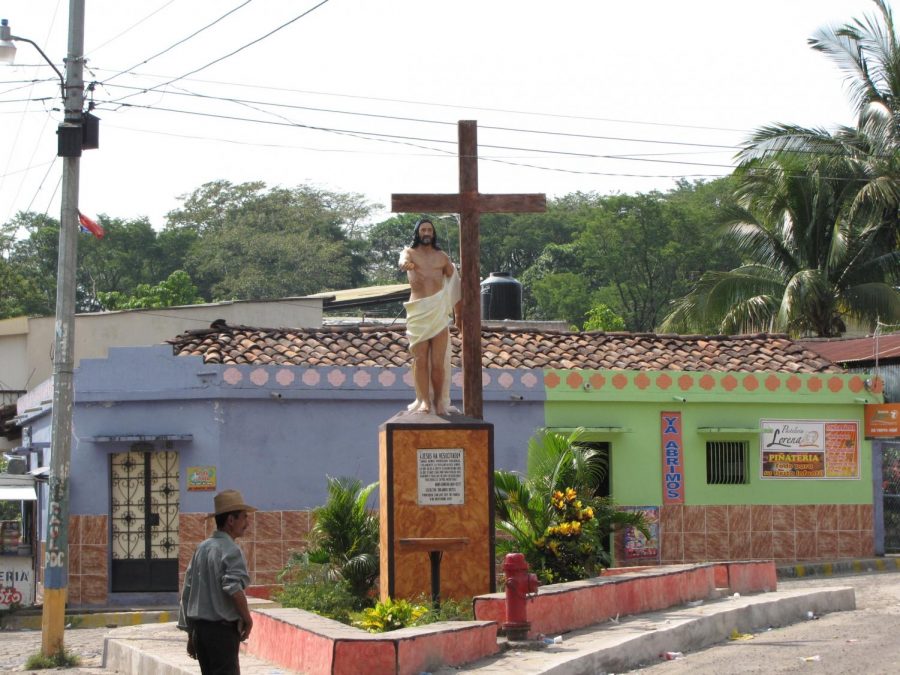 My life in El Salvador was not good also not bad.  I lived with my parents 3 sisters, 1 little brother. I worked with my father farming corn. I did not study much because I thought that study was not important in life. My mom said many times “go to school” but I did not listen to her.  Instead I took time with my friend wandering. I know many boys in almost the same situation but maybe with a different mind and way. I think the world is like a spinning wheel because you never know what opportunities will come to you.

My town people come every saturday morning this  town to buy the food for a week.

Here is a video describing my home town.

I asked my mom and dad “can I go to united states?”  She told me “no”. One day she answered by saying “ask your dad”. He said if I want to come to the United States and it is my choice then “ok you can go”.  But my mom did not want me to go. As the days passed she finally said “ok my son you can go to United States.” I know it was very hard for my mom to make the decision and I wanted to respect her as my mother so it was  also very hard for me and I felt sad and nervous because it is a very long and difficult journey.

It was my decision to leave for making a better life for me and to help my family because my country does not have a good economy. When I talk about economy for example I mean that there are not many companies or businesses hiring workers.

The opportunity to travel North came to me when I was 17 years old.  My brother was already in Virginia and he sent money for me to get transportation. It was hard for me and my mother and father to make the decision but I did it to find more opportunity for myself and my family.  I started with a group of about 20 and then there were more and then there were less depending on who joined and who was arrested and who became sick or tired.

I rode a bus across all of Guatemala and Mexico.  Then I was able to get to the border of Mexico with the United states. I was 22 days at the border of Mexico with United States in the home with the person who transported people from one place to another also there  were many people who came from different countries such as El Salvador, Guatemala, Honduras to the United States

The first and second transports that I took were buses like the ones pictured above. The small I took through Guatemala to Mexico.  The second large bus. The third was walking a long way to come to Texas. In the end it was only me and my friend who made it across together.  He could not go any further because he was so tired and thirsty. I called 911 for help. The authorities came and we were put in detention for 1 month until a judge allowed me to stay legally.

I was in the desert with no food or water for 2 days in 2014.  Below migrants carry bottles for water but most times you run out.

My friend could not walk anymore.  We called for help. We were in Texas.The Judge gave me my opportunity with his decision to say yes to a “green card.

I was  one month and five day in detention.  During the last days in detention i was desperate to get out.  I had to wait for a hearing in front of a judge

June 2014  8:45 in the evening I was in the bed when the security come and said “you be ready in 10 minutes.”  I did not know why.  They came for me and moved me from place to place.  I took my belongings and I waited for him.  At that time I met another friend who knew that everything that was going on at that moment we would go to for our freedom. Finally, we went outside and my old brother was waiting for me and I met his sons and I felt very happy when i saw my family. I staid with my brother for two days.

I lived with them the first day i felt very sad because they were leaving for work and i only stayed at home i went out to take a breath outside and i prayed from my parent and my sisters and brother. After my brother found me work I saw my life very differently from my boyhood in my home country that I love but new experiences come and  you never know what opportunities will come to you in the life.  When an opportunity comes it is worth the risk a long as you keep what is most important close to your heart.

This is my goal for myself and my family. I am working hard as a student and serving others in my job.  Because the judge gave me a chance I hope to give back.  I would like to become a police officer because I can bring justice with understanding.  It is important that we protect the good things in our society. It is important that we protect one another’s human rights.

Why do people move from one place to another? 500 years ago people like Columbus came to America to get power for his people.  The Europeans got power from other groups of people like the natives and the African slaves but today people are looking more for opportunity and equality instead of power over others.  There will always be criminals wherever you go in the world but most immigrants are not criminals.

Organizations that help protect the free movement of immigrants: