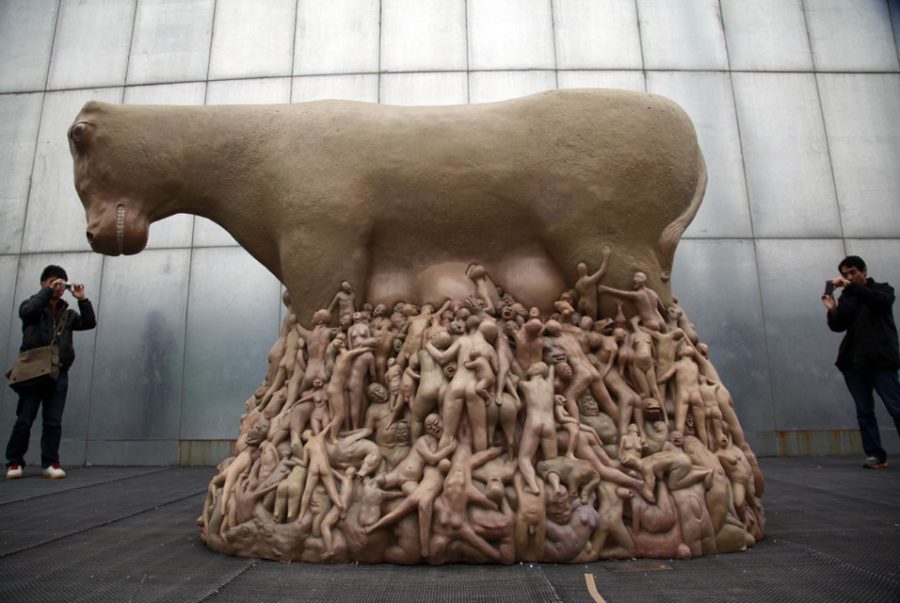 Sculpture by Liu Qiang titled “29h59’59” portrays human's disturbing addiction to milk of a cow, and what the animal has to endure in order to provide everyone with it.

Milk or dairy has taken a big part in our diet for centuries. It is considered as a major staple food everybody grew up with. Many people regard it as a natural product that is giving off by a cow. But milk has not always been inside a cow; just like your mother and all other females do not run around 24/7 with milk inside their breasts.

In order for a female to be able to produce milk, she has to be pregnant. This applies to females in any form, cows as well. But who has the patience to wait and let each cow find a partner so that they can mate in a natural manner? After all, you and billions of people expect milk to be available for you every time you go to the supermarket. Therefore, for the convenience, people impregnate cows manually, one after another, by injecting them with bull’s semen. Whether the cows want to get pregnant or not; they are basically raped for human’s milk consumption.

With pregnancy comes giving birth. Like every other newborn, the calf – a cow’s baby – needs breast milk, and more importantly physical closeness to its mother. However, it gets none of that because as soon as it is born, it is separated from its mother. The calf is regarded as a byproduct, and moved to a place where it either gets fed to fatten up for slaughter, or it gets killed right away. What is happening to a calf is far worse than abortion. The way these animals are treated goes against all principles that we have established for us.

While the cow’s milk was supposed to be for the newly born calf, it ends up in our morning coffee, our beloved cheese pizza, and almost every other food. Not only are we humans stealing someone’s milk by consuming dairy products, we are also the only ones that drink secretion of another living being, which in my opinion is pretty perverse. But maybe humans are born to disturb nature, and improvise to live, no matter what kind of damage he has to cause because in the end he is the most selfish and greedy living being on this planet.

Here is a video that explains what is happening to cows, so that you can have milk every single morning: