Milkweed; A story of survival when society is corrupt 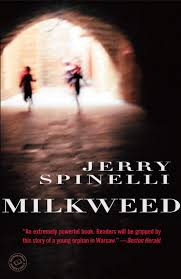 This book is about a group of kids, and all of them are going through the holocaust. The kids represent our common humanity.  The holocaust reminds readers that human government is always in danger of corruption.  What happens to citizens trapped in the corruption of a failing government?  What happens to human identity when there is no justice and basic rights are violated by the power of a corrupt society?

Main characters are Uri and Misha “thief” Pilsudski and their group. At first the kid thief was going around stealing food and other things, and then he ran into a bunch of kids,  so that is how he met Uri and the rest of them. When they seen him they asked what his name was and he said “my name is thief”, and they asked what name his parents gave him but he does not remember his parents or his name they gave him. All the kids are Jewish but he is a Gypsy and the kids pick on him and call him names like dirty Gypsy or stupid, but he does not know much because he is young so he thinks that is his name is stupid. One day Misha met this girl named Janina and he met her in her backyard, because he was eating her last 2 tomatoes and she just stared at him. Uri gave him the name Misha Pilsudski and he gives him like a story to tell people if they were to ask him.

Then they got moved to the ghettos and he thinks it is a better place, but really that is what Dr. Korczak is telling him. In reality the place are for the poor jews and they starve them. Honestly I think the “ghettos” are concentration camps because in the book Uri says, “ They’re starving us and they are going to kill us”, but Misha does not believe Uri because everyone was saying that this is where they wanted to go.

The book gets its name from the events of Chapter 31 and 32;  so Janina and Misha are in a alleyway and they find a milkweed plant and Misha wakes up to Janina screaming “Get off, He is trying to steal my shoes.”( ending of chapter 30). Misha is walking through the hallway and he had seen Uri, and he tries to say Hi to him but he keeps walking, then he followed him. Uri says “what are you doing here?” and he choking him and telling him to leave and to never come back or he was gonna tell the guards to shoot and kill Misha. Janina was out and Misha was looking for her and he finds her staring into the sky and he wonders why until he gets closer, and he had seen his one armed friend Olek. The Jackboots had hung him on a light pole for stealing, and it had a note on it saying “They’ll hang us all”. Later on in the chapter Misha is walking in the hallway and sees Janina crying and walks in and also sees Dr. Korczak rocking back and forth with Janina on his lap. Mrs. Milgrom was dead in the bed and he comforts him and then Misha says “tata” and now he is rocking back and forth also. They take her to the cemetery and suddenly the ground starts to rumble, and they start to hear bombs, and they look up and the sky is filled with them, the Jackboots all start to run while Dr. Korczak and the rest sat there and finished looking at Mrs. Milgrom. Janina was blowing milkweed pods in the air the entire time.

In the end Janina and Misha are walking around the ghetto at night time trying to get food like the usual, but Uri had seen Misha again and he said “Get out of the ghetto. Out of Warsaw. Out of everywhere. Just get out. Go. And don’t look back.” Misha kept asking around and he only told the boys what was going to happen and then some days go by and he kept on going back and everytime he would go back and check on the boys they were disappearing one by one. One night he goes out and he tries his hardest to find Janina a pickled egg,so he goes and finds a hard boiled egg ( he does not know it is a boiled egg) and he trips and drops it and it does not crack and he think it is a miracle, but he also finds a few pickles. He gets in the ghettos and gives her the the egg and pickles, she is happy about the food but it’s not the pickled egg she had asked for, but she was still happy about it. Days go by and they are still waiting for the train to pick their area up and some old man escaped and came back to warn them about where they are really going, and no one believed him and so Dr. Korczak said “I have a letter from my brother” and the old man said “ he is dead”. So the old man is trying to explain to them what is really happening when they all get cleared from the ghettos, then Misha actually listened to him and started to think about it more. Dr. Korczak said to Misha “ Do not bring back food tonight. Do not return. Run. Run.”  Misha tries to explain to Janina what Doctor Korczak said to him but she stomps, kicks, and headbutts him just to go back to her “tata”, but Misha is trying his best to keep her but he gives up because she does not want to cooperate. Then she ends up getting on the train but they do not let Misha on, but one of the jackboots tries to kill Misha, but he doesn’t and he gets up from a ditch with a bloody ear and arm from where the dog bit him at. He is walking on a track and he sees a dog and this boy, and the dog runs up to him and he gets a little scared and the dog licks his crusty wound on his arm. So he gets caught up by this farmer and Misha always bring up how he is jewish but in reality he is a Gypsy. He ended up working on the farm for 3 years then gets let free because the war has ended!

Jack Milgrom aka Misha finds out he has a 25 year old daughter named Katherine and her daughters name was Wendy Janina, and then they take him home and he watches Wendy do handstands and swing on the swingset. Katherine asks him is he going to tell her why she gave Wendy the middle name Janina and Jack says “Someday”. Jack “Misha” Milgrom was a victim of the holocaust and he made it out of the ghetto.

As I read this book I found some good themes in the story.

They feel like criminals because the government is so corrupt, and  it makes them have to steal and other crimes just because of who they are.

The way i seen the crime in warsaw while i was reading the book, everything they did it was a crime. When they would leave out, you already knew that they were about to do something illegal, but that is only because the way they had to live.

Misha “ I’m not a jew, I am a Gypsy” and they still make him wear the blue wristband.

They got called very harsh and cruel names, and they were making them do things that they did not want to do.

War and the power of corrupt government

This government around this time was very corrupt because of who was in power, and if you give the wrong  person too much power, and things might not go the way they tell you in all their speeches and their events. Any person who tries to create a mass genocide is a cruel person.

His entire life he had to smuggle everything, and coming to a new country it took him awhile to adapt to the way of living.

They basically took his life away from him for 3 years and then the war ended and he became a free man, he also got to explore the world, but it was all new to him. In the beginning it is hard for him, but he caught on real fast and he started to do what he knew best, steal. Then he went and sold everything he stole.