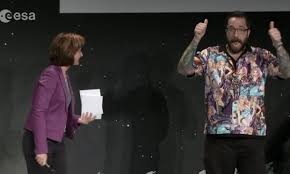 In times like these, landing a probe on a moving comet 300 million miles  away is a much needed scientific advancement. The”Verge”, seemingly is more obsessed and concerned with Matt Taylor’s (scientist who worked on the probe landing) apparel. The journalists of the Verge stated that Taylor’s shirt was sexist and ostracizing  because it depicted provocative images of scantily clad women. Radical feminists and other misandrists over-emphasize on subjects like this, declaring that the widespread sexualization of females (on clothing and media) is a significant social issue (sexism).

Radical feminists vehemently search for evidence that condemns men. Although these radical feminists have no official doctrine, their incessant complaints and disdainful  criticisms about male “wrongdoings” exposes the stark fact that they want to disenfranchise men. This would exacerbate  our world, not make it any better. Equality should exist between all people irrespective of their skin color or gender.

Taylor’s shirt was provocative, but I dont think it degrades women. If you subjectively  perceive it as degrading, fine, but you shouldn’t impose that on someone else’s  freewill. This “issue” doesn’t even contend with real sexism. A myriad of misconceptions about Taylors shirt are promulgating through the internet. But one misconception in particular is astonishing. Some individuals find that Taylor’s shirt represents that the scientific community is not conducive for females scientists. A provocative bowling shirt should not be taken so deeply; it is meant to only be view by the surface since there is no other alternative meaning (sexism, degradation). A more serious example of sexism would be a male employer not hiring a competent women because of her inherited gender.

Advancing our knowledge of the cosmos far outweighs any trivial complaint of alleged sexism, especially in this case.