MLK; Listen with Love and Act for Justice 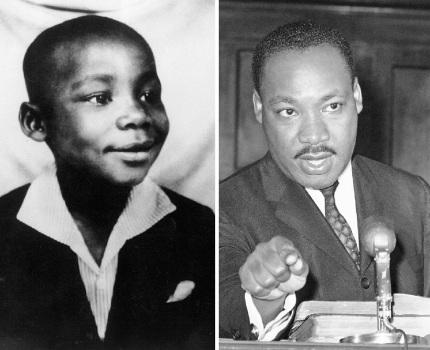 The following is a creative writing exercise based on research.  It is meant to inspire our imagination in the present circumstances.

Hello Dr. King, thank you for talking with me today. You have been a hero for fighting for equal rights for African Americans. You have sacrificed a great deal to bring more equality in this country. While writing this we have just celebrated a national holiday in your honor. We, the students,  want to have a better understanding of what made you so brave and  strong when facing all these challenges.  My family is very important to me and matters a lot. Can you share what your family taught you and how they enabled you to become the person  who you are.

I grew up in a home where there were strict rules. My father was a minister and expected us to follow the rules and to go to church. My mother thought school was very important and made sure that I had completed all my school work. When I was a young boy I had started to notice that there were different schools for my white friends and they had stopped talking and playing with me. That’s when my parents would start to teach me about segregation. That’s when I saw a glance of how the world was and I felt there was a need for change.

I faced a challenge when I transitioned from one school to another. I know how hard it is to face challenges but wanted to know about the everyday challenges that you encountered as a  young student.

As a student I was always interested in public speaking.  I pursued this interest by enetering a statewide public speaking contest.  It was during my young high school years in Atlanta, Georgia where I won a speech contest.  It was a two hour bus ride from Atlanta.  When riding the bus I had to stand up because the seats belonged to white people. At that time public transportation was still segregated in most Southern cities in the US. Rosa Parks and the Montgomery Bus Boycott was some 10 years in the future.  This made me angry and realize that there has to be change on how African Americans were treated in the south. From that point on, I knew that I had to fight for equal rights for African Americans.

I have had a lot of help in my life and wanted to know who were your mentors and who you looked up to for inspiration.

All my life I grew up going to my father’s Baptist church where he was the pastor. I would learn about Jesus and how he promoted love and non violence. I wanted to follow my father’s Christian leadership example. I realized at that time that true Christian leadership is only possible with love.  As I grew older I knew I wanted to change society and the Jim Crow Laws about African Americans in the South. I met others who also wanted to bring these changes I had joined a student nonviolent coordinating committee as well as the NAACP. in these groups we would protest laws of segregation and we would often get arrested and put in jail. During these years I was learning about Gandhi. He brought democracy and independence to India by peaceful civil disobedience.

Our country is facing a lot of challenges now.  In the summer we had demonstartions in the streets by the Black Lives Matter movement demanding justice and equal treatment by the police. Just recently we had a largey white mob of Trump supporters storm the Capitol because they did not accept the results of the Presidential election.  There is still no inequality.  There is still racism.  There is still prejudice, fear and violence.  From what you have learned, practiced and taught, what is the best way to continue in these difficult times?

I wrote this quote years ago and I still think we need to keep it in our minds.  Change is always necessary to solve new problems.  Problems will always be there. Change may not happen right away but now we know that there is a light of hope for change “Darkness cannot drive out darkness; only light can do that. Hate cannot drive out hate; only love can do that”. Love is always the answer.  Love takes listening to the “enemy” or the one who might be hated.  Can we use media and technology to listen to one another rather than to judge one another with prejudice?  Now while this isn’t an easy task this is a way that we can become one nation where there is equality for all.  We must listen with love but always be willing to act for justice. In the end, we will remember not the words of our enemies, but the silence of our friends.”

The video below comes from the King Center.org and was recorded by the BBC when Dr. King was 37 years old.  Martin Luther King was murdered two years later.