My Life In Ink 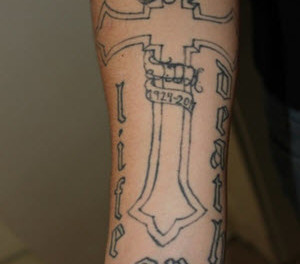 All my tattoos have a meaning and a story. The first tattoo was a cross on my forearm. It has ribbons around it and it reads R.I.P., J.D.K., 1924-2011. I got it when I was 13 from one of my friends. It honors my uncle Jack who has passed away. It was a very sad thing to go through because I was very close to him. We used to hang out and make skate board videos. He never skated, because he was in his 80s but he loved to watch and shoot videos and pictures. We used to go to skate parks and spots around the area together. 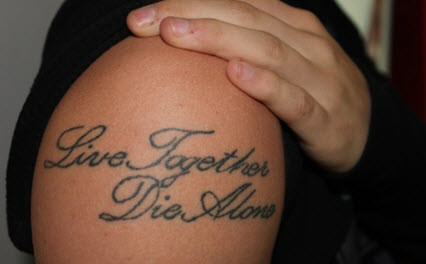 The one after that was the one I have on my shoulder. When I was 15 and I got it from my sister’s boyfriend; it ties in with the cross. It reads  “live together, die alone”. Sad to say but it’s reality and it happens. We have to come to terms with that. The tattoo is in cursive writing, and it is bold.

The next one  was a cursive peace again.  I got this one the same year, from the same guy that did the “live together die alone”. It says, “family is forever”, in bold, like the last one. This one is bigger than the other one.  This one made me decide that I would have a family sleeve. And two weeks after, my brother said he wanted that tattoo too. So he has the same one in the  same place. For my brother it means that even if him and my sister don’t work out that we are still family.

The next tattoo was the area code for where I’m from. It is 703 in graffiti but it’s a little faded. It is faded because I was bleeding 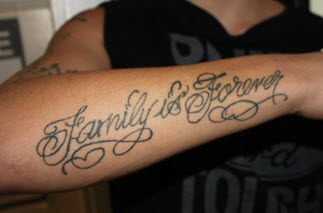 a lot when I was getting it. I was 16, and I went to a tattoo party. I sat down and thought about what I wanted for a while, and then I decided to get the 703. 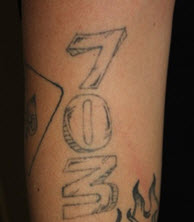 The back peace was my next one after that. It says “loyal to the game’’, life. It is a struggle, but I  have to persevere and keep moving.  I  can’t sit and dwell in the past. The tattoo goes across my whole upper back. I was 16 and it was from the same guy, my sister’s boyfriend. I like it a lot, but sometimes I think I should have done it smaller because it ruined my original plan for my back. I was going to get my whole family as wolf because my dad has that, and I’ve liked it since I was seven or eight, which was also my age when my parents split up.  I have always wanted the wolf pack because my dad has that on his back. The tattoo has a wolf for every kid he has and one for my mom. To me it symbolizes family. 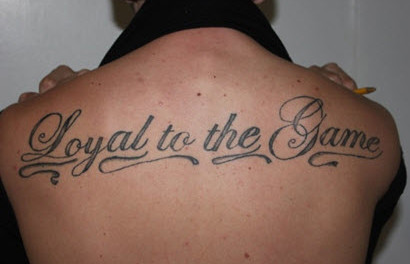 The next tattoo after that was something to go around the cross. It says “life or death” in lower case old English. I was thinking of filling them in but I haven’t done it yet. I got it the same year 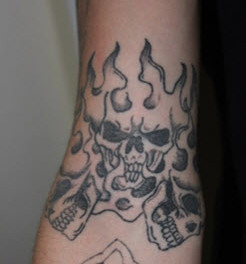 also, by the same dude. It fits in with the cross because it represents when uncle Jack was living and when he passed.

I also have three skulls on fire, to symbolize death and the sins we live though or may commit. We can always change to better ourselves. The tattoo reminds me of some of the things I’ve done. Also something I’m not proud of. I’ve always tried to better myself after I have come to terms with things I have done. This tattoo also ties in with the cross for my uncle.  I was thinking of incorporating the twin towers behind it because I was born 9/11/96. I got it right in the fold where my forearm meets my bicep. This was the most painful one of them all, because of when I had it done at. 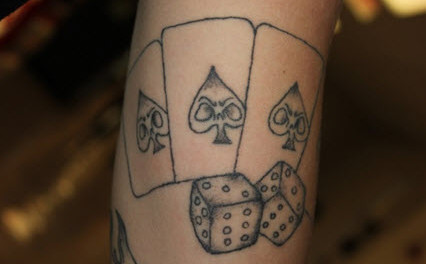 The next one is four cards and a pair of dice. In each of the cards I have my niece’s and nephews’ names. I’ve wanted that tattoo  since 2 years ago.  Just this year I had another one done.  The cards are on the back of my bicep. They hurt when he had to go close to my arm pit. My niece was there with her dad who got her name in a crown, that day too.

My last tattoo is a black light tattoo of a diamond melting. I got it because eventually I 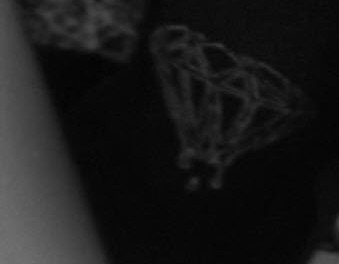 will have a yacht master Rolex and I’m putting diamonds in the bezel. It’s a form of motivation and will always remind me of one of my goals. If you have ever heard of “daemons are forever” it shows that.

I like all my tattoos and they have a meaning to them. I don’t regret any of them. I don’t care if other people like my tattoos or not, because I like them and that’s all that matters to me. I will probably get more tattoos but I don’t know what I’m going to get just yet.