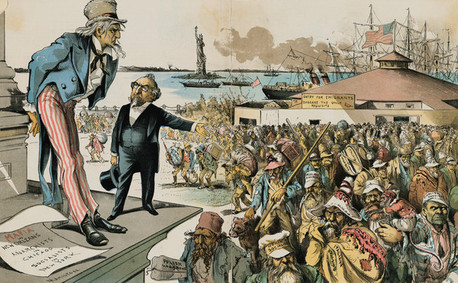 In the 60 years following the end of Civil War to the start of World War I, the United States experienced a wave of immigration, absorbing 25 million Europeans in hope of finding opportunity. The majority of the new flood looking for jobs in growing cites were from Eastern and Southern Europe;  later to be called called New immigration as the old immigration consisted of the Europeans from the North and West of Europe such as England and Germany.

Coming from the countries of Greece, Russia, Italy etc. men came in search of a better life. With the manufacturing business growing many jobs became available. Some did not want to be forced to join the military in their home nations and others fled from religious persecution. The Eastern states of Europe such as Russia gave a helping hand in repealing the laws of forcing peasants and skilled workers to stay as well as allowing them to take all savings with them across the sea. Early on and even to this day the American dream for economic and social opportunity shows itself to be the root of our diversity in the United States.

Coming from a childhood of crossing borders whether legal or not I understand the want for a better living environment. Maybe not as much as my parents but from the stories they’ve told me of their country I’m glad I was brought over before I was old enough to remember. Although there is nearly a century in between today’s modern immigration and the wave of 19th-20th century New Immigration, the discrimination and persecution still remains. Many don’t want American jobs taken from people they feel don’t even belong in the country. Others feel as though a revolution is taking place with all the immigrants trying to change America. Fighting through it all to pursue a dream, immigrants have been some of the strongest groups to emerge in these Americas.