No Fights On Flights 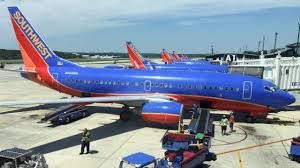 Shortly after Southwest flight 2530 landed in Burbank, California from Dallas last month, a fight broke out between two male passengers. This airplane violence among passengers was similar to the United airlines incident that happened a month ago.  On the United flight, a passenger was beaten and removed from his seat when he had payed for his ticket.  He now holds a law suit against the United airlines. This raises new questions about airline securities and safety that goes beyond terrorism to the basic need for good human relations.

The Southwest plane fight all started with two men as they were jostling near a row of seats. Suddenly one of the men forces the other over the backs of the seats in front of them. As his foe has fallen he leans towards him and releases a series of punches. passengers that were in the plane tried to stop the fight, a woman asking the man ” what is his problem?” as she try’s to stop the man from punching his foe. What was the problem? what made him react the way he did? Are our airlines safe?

One of the men suffered minor injuries and was able to continue on to his destination. “As for the other man 37- years old, he was detained at the gate and arrested for misdemeanor battery and booked to the Burbank city jail said Burbank police”.
As you watch the video pay close attention to how no security was on the plane.  So again, are our airlines safe? Passengers have Passenger Bill of Rights on flights to travel around the world. Airlines should consider having securities that are trained in human relations in case of a fight breaking out in the middle of the flight or after possibly even before, it would make airlines more safe and passengers will be relieved because they know they will be protected or prevent anything horrifying from happening.

The Transportation Security Administration (TSA), are the security that worry about terrorist and weapons that are not allowed in an airport and Federal Air Marshals are those who hide with the public and are mysterious people.

What we need in airlines are air marshals that can relax or counsel someones human emotions from  breaking out and having panic attacks or anxiety attacks.