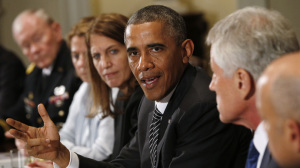 President Obama has been stressing the fact that Americans should not worry about Ebola since its hard to spread because its a rare disease and, it spreads through body liquids. Obama believes that it is possible to prevent a serious outbreak. He says that this is not an issue in America.

Every nurse and doctor are very healthy and all the people are getting paid well.  He says the Americans need to make sure we take care of our medical professionals  as well as they are taking care of the people. He also said that if there is any other cases of Ebola a medical “swat team” will show up and make sure every necessary equipment would work if done properly. He is communicating all the information to all hospitals all over the country to know how to deal with Ebola. He has been working very carefully with the mayor of Dallas who oversaw the mandatory quarantine of an entire group of American citizens who may have been exposed to the disease. Ebola is not transferred in any way unless touching the people. He is enforcing the “contact tracing” of everybody who is or was in contact with anyone with the symptoms of Ebola.  All are being traced and asked to stay in quarantine.  The only challenge to this so far has been a nurse in Maine who disagrees scientifically with a mandated quarantine on her.

President Obama said, “I hugged and kissed’ medical staff  who had been treating an Ebola patient  and felt perfectly safe doing so” .  He thanked  the professionals  saying that the doctors are doing a great job. If we follow the steps and are careful about it we can stop the spread of Ebola. Obama is making sure everything is in place if another Ebola patient appears. He is confident on preventing the spreading of Ebola. Chances of an American citizen catching Ebola are very low.

Basically President Obama is taking the roll of Chief Citizen, he is representing the face of the people, being a leader by showing the people Ebola is not really a threat to the united states and if it did spread, all the precautions and safety measures are ready to take action. He will not let it spread, and to show the people it is safe and they can trust him, he hugged and kissed a nurse treating an Ebola patient. I believe it is his job and duty to show and calm american about the Ebola situation, and its good that he is taking safety measures in case of an outbreak.