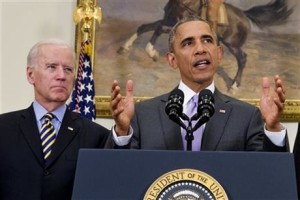 President Barack Obama is negotiating with the US Congress for new military authorization for force on the Islamic State militants and proposed a three year time limit for U.S. military action. Republicans are saying Obama`s proposal is too restrictive for this mission to succeed and Democrats believe that Obama’s authority should be limited so we don’t sign up for another open ended war. If the new authorization is signed into law then Obama will no longer have to use the authorization used in 2001 and can only use the new powers. This change would prevent any president in the future from interpreting the law the way Obama has been for the past year.

I believe that if we put troops on the ground in Islamic states then it will just start another huge war between the US and other countries. I think it has its pros and its cons, a pro would be that we would gather intel on the islamic state and always know what is going on but a con of this is that the Muslims will also see us and possibly think we are preparing for war or an invasion. I think there are different pros and cons for both decisions but if president Obama puts the troops on the ground then I believe there will be some sort of war and it will make alot of people angry at Obama.