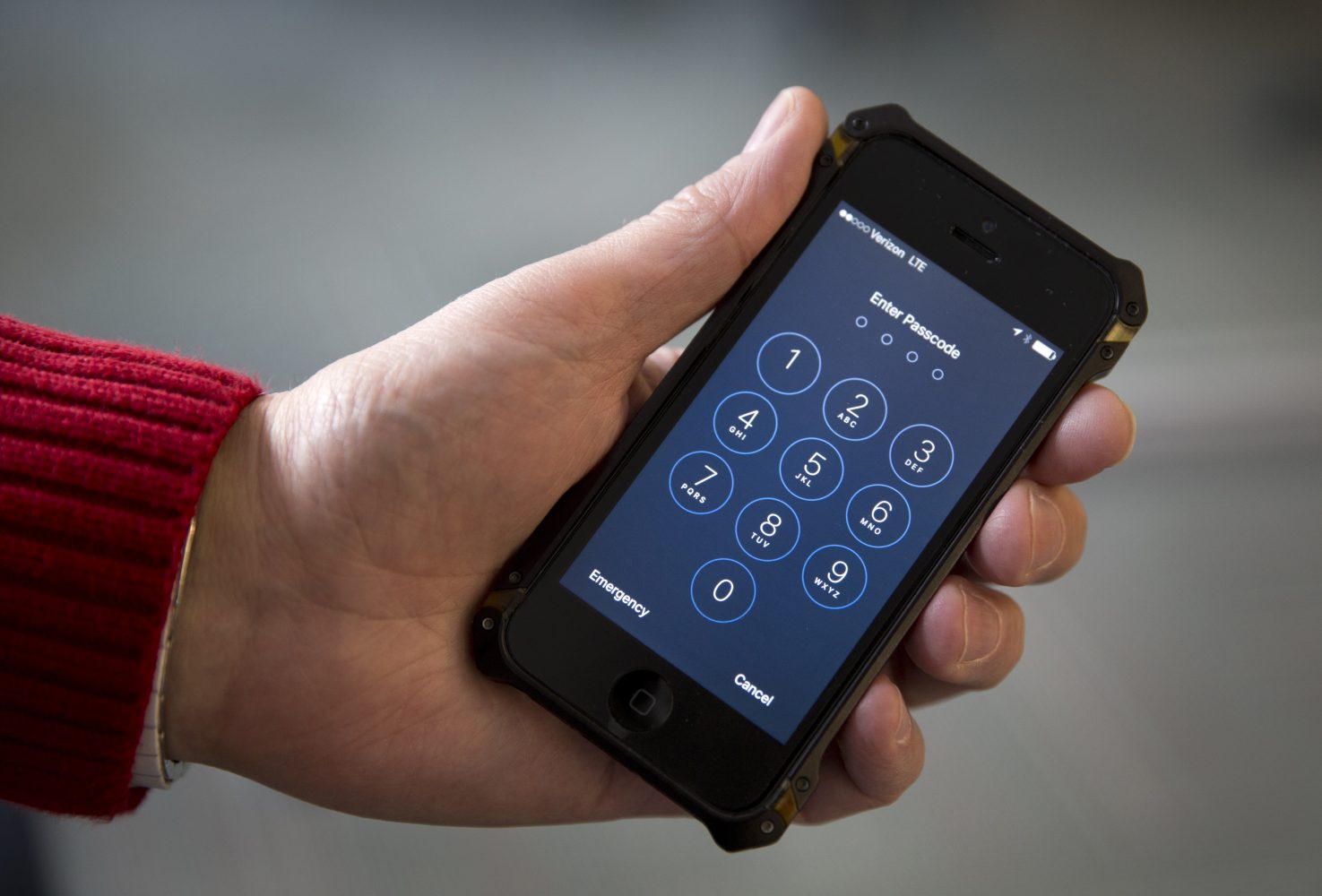 FILE - This Feb. 17, 2016 file photo shows an iPhone in Washington. In the searing debate over the FBIs effort to unlock a terrorists iPhone, federal authorities argue theyre seeking only limited help from Apple that wont compromise the privacy of other iPhone users. Security experts say its not so simple. (AP Photo/Carolyn Kaster)

The use of cell phones has become more popular and necessary from generation to generation. Today students use their cell phones for various activities such as Uber, social interaction, paying for items, navigation, music, fitness, research, etc. By the time students reach high school, 51% of them are carrying smart phones according to a survey by Education Week. Some people, such as Mountain Views administration, believe that students should have to turn in their cell phones before every class; however, I believe they shouldn’t because a significant amount  of students at Mountain View are legal adults and parents believe students should have them for education, and times of crisis.

Even though most students disagree with the new phone policy, some students support it. People who believe students should turn in their phones believe this because it’s less of a distraction, there’s less liability for cheating, and there are less opportunities for conflicts that arise from social media.

It’s a proven fact that teens are distracted easily. A pro and a con of cell phone use these days is that cell phones can do just about anything from. Just about anything you can think of your smart phone can do, and that’s a problem with teens. When teens are sitting in class, 9 times out of 10 when they get a notification and hear it, they’re just itching to check and see what they’re missing. Cell phone use for kids has become a drug, and over half the population is hooked. To get that “fix”, students stare at their screens all day, and we just can’t have that in the schooling environment, now can we?

“One Third of Teens Use Cellphones to Cheat in School” according to U.S News Education. Giving teens the power to keep their cell phones on them in class also comes a great deal of trust. Teachers and administration are relying on the integrity and honor system of students to not cheat, which is not something most teachers are comfortable doing. Students these days also see cheating as something totally different from it used to be. According to U.S. News: “Others see texting during tests simply as helping one another, as opposed to looking at someone else’s paper during an exam, which they consider cheating.” Even though the students don’t see some of their actions as cheating, it is, and school officials can’t permit the actions of cheating to go on in their schools.

The biggest reason, in my opinion, that school officials don’t want students to have their cell phones in class is because of social media conflict. Social media has become one of the largest issues among teens, they just can’t seem to get enough of it. Whether it’s the drama, or the ample amount of twitter fights occurring on their time lines, they can’t seem to break loose, which in turn creates problems for school faculty. Being a teen myself, I know that a social media beef is never left on social media. Everyone always seems to take it a step further and drag in from the internet into the real world. And where do students tend to hash out this conflict? If you said school, then you’re absolutely correct. By limiting students’ access to phone use in the class room, that also limits time for social media action, which leads to less conflict, which in the end leading happier school officials.

Despite these compelling arguments, why students should be allowed to use their cell phones is because parents support cell phone use and technology use in class can support education. A recent survey on Education Week has shown that 17% of schools require the use of cell phones in the classroom. Even FCPS has adopted this policy. Now that schools are jumping on board with this policy, parents are even more eager to join along: 68% of parents surveyed believe those tools can help teach reading skills.” Additionally parents agree that cell phone use “makes learning fun, teaches basic tech skills, and encourages curiosity among students.” To adapt to the new policy change, teachers are finding new ways to accommodate cell phone use.

With age comes responsibility. The majority of students at Mountain View can vote, buy cigarettes, get drafted, and have been driving for 2 years, yet they still get their phones taken from them. On top of the responsibilities given to them by the government, these adult students possess more motivation and drive than their younger counter parts. Administration should not look at age as and indicator of trouble, but as an indicator of responsibility.

In conclusion there are many pros and cons of cell phone use in the class room. Whether your school officials deem it acceptable for you to keep them on your person or not is strictly up to them. It’s a rule that you won’t be able to fight (trust me I’ve tried), but if you are one of those lucky students who isn’t required to turn their cell phone in, enjoy it, and don’t take it for granted.