Oil Leaks from War & Industry are Destroying Our Oceans

On December 7th, 1941 just before 8AM on Sunday morning, Pearl Harbor, a U.S naval base was attacked in Hawaii by the Japanese. It was the start of WWII. The Japanese managed to destroy 20 U.S naval vessels. More than 2,400 Americans died in the attack and many more were injured. The next day President Roosevelt and congress declared war on Japan.

Today one of those U.S vessels is still at sea, sunk but still at sea. The USS Arizona Was a Pennsylvania class battleship built for the United States Army in 1910. It served to escort President Woodrow Wilson to the Paris peace conference. It survived World War I but was destroyed during WWII. It was attacked by Japanese torpedo bombers on Pearl Harbor on December 7th, 1941. Arizona exploded violently and sank, taking with her 1,177 lives.

Today the wreck still lies at the bottom of Pearl Harbor, now it is known as the USS Arizona Memorial. It was decided that the man would be considered buried at sea and Arizona would lie there as a memorial of all the lives lost at the hands of the Japanese.

While it would seem that the damage of the attack ended at the end of that day, in reality we are still experiencing the damage today.  Today fuel continues to leak out of the USS Arizona’s wreckage. According to Barbara Maranzani who writes for the U.S History Channel, approximately 500,000 gallons of oil are still slowly leaking out of the USS Arizona daily. Today after more than 70 years, 9 quarts of oil spill out of the wreckage every single day. Imagine where that oil goes? Imagine the lives being taken thanks to it?

The Center for Biological Diversity found that The Deepwater Horizon, an oil spill on the Gulf of Mexico in 2010 which  killed and harmed about 82,000 birds, 6,165 sea turtles, and approximately 25,900 marine mammals. Now imagine the USS Arizona still at bay now spilling 9 quarts of oil a day.

According to a report released in Spring of 2012 by the National Oceanic and Atmospheric Administration, there are 36 submerged vessels in US waters, these contain oil that could threaten the National Coastal Marine Resources.

Of these 36 the NOAA suggested the assessment and possible removal of 17 vessels. Some of the vessels prioritized include Francis E. Powell off the Eastern shore of Virginia containing 93,000 barrels of fuel oil; The William Rockefeller, off Cape Hatteras, with 150,000 barrels of fuel, and the China Arrow off the Virginia and Delaware coast, with 93,000 gallons of fuel.

Last year, in May, the NOAA announced the removal of The Coimbra, a British supply ship that was torpedoed by the Germans during WWII. It had been at sea since WWII and was removed last year after its sinking with 2.7 million gallons of lubricating oil. The wreckage laid in Long Island, New York, the spill was so obvious that it was only taken care of after residents noticed the oil reaching shore. 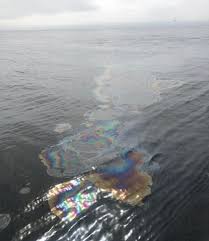 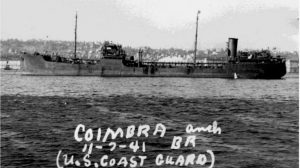 Now imagine the rest of the shipwrecks caused by war that are still underwater causing so much damage. War has destroyed and continues to destroy our environment. We pollute our water, we kill our fishes, we hunt our animals, we burn down trees, we pollute our air with fuels and fumes. What are we? We are supposed to be human, but we act like animals, well actually no worse than animals, because even animals have an instinct to protect their territory but us, we don’t. We are careless and reckless and damage and hurt everything and everyone around us.