Once a King, Always a King Book Review 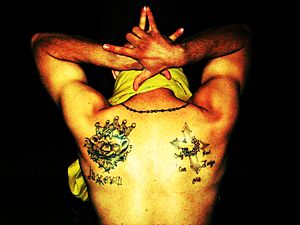 Once a King Always a King, a novel writing by Reymundo Sanchez, tells a story of the author’s life and how someone can better themselves. Once a King Always a King, the sequal to My Bloody Life beginnings with the main character “Lil Loco” making his way out of the infamous Almighty Latin Kings a gang created in the city of Chicago. After his violation out of the Latin Kings, Reymundo formerly known as “Lil Loco” tries to create a new life for himself without any gang related activity, although he fails at doing so. Reymundo fails to stay away from being involved in illegal activities, causing him to get arrested and sent to prison due to the police finding him with narcotics.  While he spend a few years in prison Reymundo took time to figure out what the most important things in life truly were. Reymundo spent much time by himself, so he could try to recollect himself and find what it truly meant to live life without drugs or violence. Once out of prison, Reymundo tries to become a well-adjusted citizen and begins a new life. Eventually in his quest of creating a new life for himself he falls in love with a woman named Marilyn and with that new love came a new home.  Once a King Always a King is a novel about trying to take a dark past and make it into a brighter future for him.

Although, the story tries to tell a good message about being able to change, after going through rough situations the message is not easily expressed. The author has a hard time trying to express what he is actually try to say. In the novel there seems to be a huge absence of literary devices such as metaphors and similes. Making the writing somewhat difficult to read, because of how the writing just told the story. The author has a tendency to only list things that happened and tell the story how it happened.  There is also lack in detail within the writing, causing the writing to seem very elementary, most of the sentences in the novel seems to mostly be composed of simple sentences.

Even though the writing lacks in a few aspects the author tells a good story of how he overcame many obstacles and how someone can change from being known as a violent gang banger to a working American citizen. The author left me with the impression that anyone can change for the better and succeed in life, that even though bad things may happen in life things can always get better and to make sure to stay educated. The author shows his readers that with education comes a better life and better ways of living.

This is a book I would recommend to someone, not for the way it is written, but for the message it tells and its story. This is a book someone with a have difficulty should read, because of the way it tells a story about someone succeeding in life and having a reason to stay motivated.  The author did a good job at showing how a person changes from bad to good in their personality and lifestyle choices.