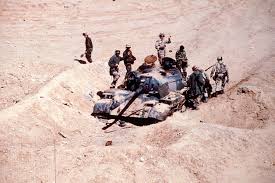 The Operation Desert Storm was known as the first Persian Gulf War. It was a successful war waged by President George Bush and his “coalition of the willing”  in response to Iraq’s  attempts to fight against and occupy the independent oil rich nation of Kuwait to its south.

Beginning in 1889 the British protected the area of Kuwait until 1961. They used it for the purpose of getting oil to fuel their empire.  Kuwait had been part of Iraq for a long time until 1923.  After that, Kuwait formed its own constitution to be independent. Iraq protested this independence saying that Kuwait was part of their territory.

In 1989 and 1990 Saddam Hussein; dictator of Iraq wanted to fight to own the land of Kuwait.  To get it back he invaded it in 1990. Most of the world was impressed to know that Hussein had the courage to invade a foreign territory. The US central command expected a limited invasion, but instead Iraqi forces had invaded downtown Kuwait City and were headed south toward the Saudi Arabian border.

The beginning of the operation was named Operation Desert Shield.  It was led by U.S. General “Stormin Norman” Schwarzkof.  This war is a turning point in media coverage because satellite TV in the 1990s made 24/7 live news coverage possible for the first time.   The U.S. finally entered to war at the Saudi request. It was a successful war which was won easily and at great cost to the Iraqi army but not before the Iraqis destroyed many oil  drilling wells.

I think that the U.S. did not enter this war just because they thought it was unfair and not right for a country to invade another country, but because of Kuwait’s valuable fuel of oil. Everyone must have known that the major purpose of this war was related to the world economy.