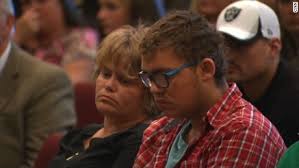 The shooting that happened on October 1, 2015 in Oregon’s Umpqua Community College is one more story of gun violence in America.

There is  a boy named Matthew which the killer, Christopher Harper-Mercer called “the lucky one”.  Mercer gave Matthew two tasks to complete in order for his life to be spared. The two tasks were to give all of Harper Mercer’s  messages in a flash drive to the police and to watch as he would kill his classmates. Matthew has a trauma for witnessing the killings. Matthew feels guilty that he lived while others died. What happened to Matthew to witness is cruel; he has to live with that scar for the rest of his life.

Some of the students that plan to go to the community college or already go might want to transfer to another school. All community colleges in America need to improve their security. Currently, I feel safe at this small school, but I would l feel unsafe at a larger school due to all the weapons that people can carry without anyone’s knowledge.

In order to prevent these tragic events from happening there should be  police checking peoples bags in case there is any sort of weapons. After this shooting I feel more laws should be enacted for the limited use of weapons. There have been too many shootings in schools over the years because of psychopaths killing innocent people. We also need better mental health care.