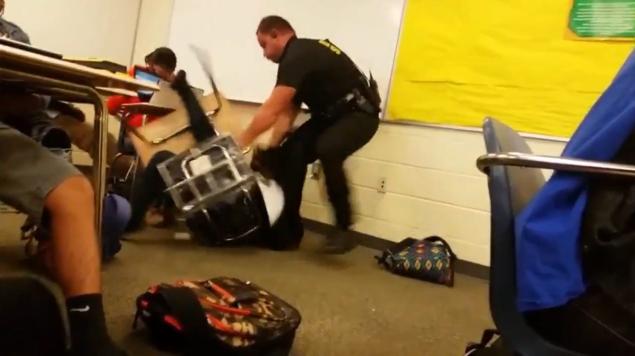 Watch video here: http://www.cnn.com/2015/10/27/us/south-carolina-school-arrest-video/index.html
“I can’t imagine any justification for treating a child like that in a classroom,” Victoria Middleton, the head of South Carolina’s ACLU chapter, told CNN’s “New Day” on Tuesday. “… Whatever led up to it, whatever rationale may be presented, does not justify the force with which that student was treated.”
On Monday, Ben Fields, a School Resource Officer, was caught on video forcibly and brutally removing a young girl from her desk in a Spring Valley High School classroom. Some believe that the officer was within his rights, which is to use whatever force necessary if the detainee does not comply with the officer’s wishes. Another argument surfaces, though. The incident that provoked the attack did not require such force by the SRO.

In the U.S., high school teachers sometimes rely on the services of school resource officers to take disciplinary action when students are being disruptive. This use of a police officer for classroom discipline is wrong.  This almost prevents the officer from doing their actual job, which is to prevent or stop crime from occurring within the school. A trip to the Principal’s office  or meeting with another school administrator would be much simpler. As the dramatic event unfolded, it has not yet been proven if the officer was within his procedural rights.  It seems to be that he was in the wrong place at the wrong time and reacted with excessive force.

Police brutally has been a common issue recently in the United States. There have been arguments that the police officers’ brutal acts of violence are racially motivated. As past events may prove this theory, at least the potential targets felt safe at school. Spreading this abuse of power to schools may have just put the young students’ educations at risk; they will not want to show up to school anymore because they may feel unsafe.