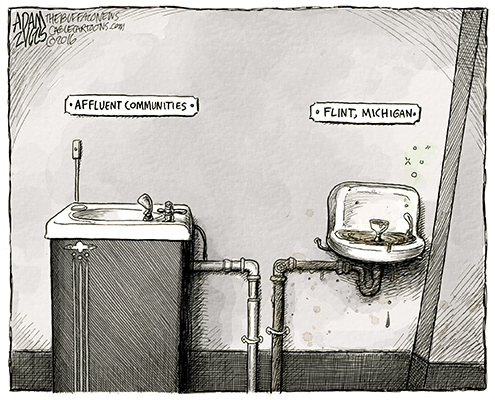 Some of the worst problems develop over time and take a long time to fix.  Flint Michigan has been without clean water since April 2014. Unfortunately their water has been contaminated and as a result of it many people have became ill. It is said that most of the water that is contaminated is filled with lead. Obama had promised to come up with a solution while in office but failed doing so. This crisis doesn’t have an overnight solution. In time Flint will soon have clean drinking water. Both parties need to work together instead of pointing fingers as to whose to blame. President Obama promised to replace the old and rusty pipes. As a temporary solution they are funding for bottles of water.

The political parties are blaming one another instead of focusing on the solution to this complicated problem.  Despite President Trump’s new Budget proposal cutting funds to the EPA by 31%, Flint has recently been granted $100 million from an action taken by President Obama and Congress before he left office.  Unfortunately it will take more than just money to fix this problem.  Political cooperation from both sides is necessary.

The Republicans are blaming the local democrats who have been governing the city of Flint which is near Detroit and this may have caused some voters to go for Trump in the 2016 election.  President Trump won Michigan by only 0.3%.

We have a special problem in the United States, which is that the Democratic party is more of a crime syndicate than a political party.
http://www.nationalreview.com/article/429803/flint-water-scandal-democratic-pattern
Democrats are trying to hold President Trump accountable to his promises and so far are disappointed with the lack of action.  In his campaign he promised tax credits to private industry that agreed to help rebuild America’s cities.

Flint is still without clean water and its disappointing to me. I would’ve thought it would’ve been solved by now. Instead of the Trump foundation talking about fake news they need to look at the real problems that’s going on in America. Flint was a problem since Obama was in office. The majority flint voted republican to see if there would be a change.

Here is a sample of what the people of Flint are saying.  It is a daily crisis that must be solved with action and not partisanship.  The story of Flint is  story of the failure of the government to provide for the “general welfare” of the people.  In America problems happen.  What matters most?  When we face problems we must choose to become part of the solution.  In this case party politics is becoming a greater part of the problem.