Pearl Harbor brings USA into WWII; Was it Inevitable? 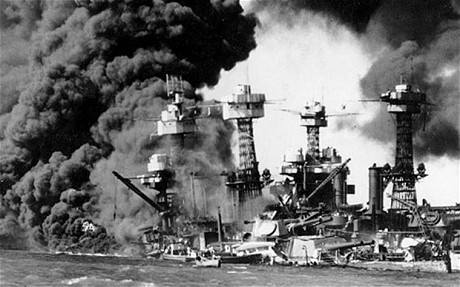 The Japanese attack on Pearl harbor is an American memory which lives in infamy. On the morning of Dec 7, 1941, The Imperial Japanese commenced a surprise attack on the Americans hoping to prevent the US from interfering with their plans on southeast Asia. Since Pearl harbor had one of america’s biggest naval fleets, the Japanese planned to bomb and destroy all of it. Thankfully, the Japanese didn’t destroy every single ship in Pearl harbor and the Americans salvaged what was left. The aftermath of the bombing on Pearl harbor left the Americans furious and bloodthirsty for revenge. And so the day after, President Roosevelt declared war on Japan on Dec 8, 1941. On that day America’s isolationism ideals ended and was fully committed in WWII.

The attack on Pearl harbor was a bad decision made by Japan because they should have known that America would definitely do something about it. Japan should have thought that maybe if they attacked the US that they would join in on the war and go against the Japanese. If Japan had been less direct and just taken over the southeast Pacific slowly, then the US wouldn’t have a strong reason to join in the fight. The US would be much more hesitant on their decision to join the war. But then again the US joining the war was inevitable. The opposing sides would have been too much for the Allies and US would have had to make a move to keep balance.