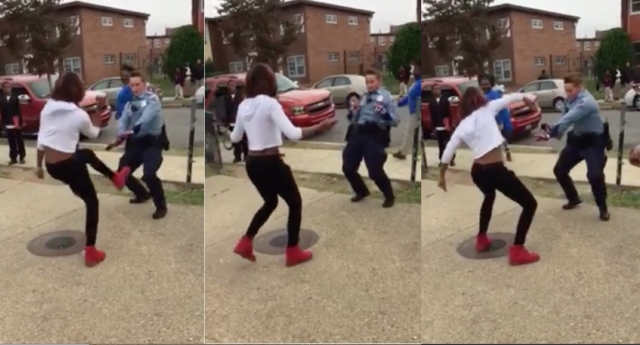 On Monday Octuber 26th a polices officer broke a fight apart. The police officer is a woman . She didn’t want to be identified. What makes this story so interesting is the way how the officer broke up the tension around what could have been conflict and turned it into humor with the creative skill of diplomacy.  Aaliyah Taylor, a senior student at Ballou High School in Washington, D.C. walked to the officer in a threatening way.  When the student played “Watch Me (Whip/Nae Nae)”  on her cell phone the two of them started  showing their moves.

“Instead of us fighting, she tried to turn it around and make it something fun,” Taylor said. “I never expected cops to be that cool. There are some good cops.”

“I mostly hold my head down when I dance, so I didn’t really see her,” Taylor said. “But when I looked at the video after, I was like ‘Oh, she has some moves.’’
Taylor thought that all cops were bad. She said that she has six sisters and one brother and all of them had been arrested or detained by Police for non-violent offenses. Taylor who has not been arrested before thought that the police who arrested her siblings had been rude in an unnecessary way. But now everything changed, her experiences with the officer made her think that there are good cops as well.

What I think is that a few bad cops are putting  the majority of good cops’ reputations in a bad light for the community. It is like people being racist to other people because one person is acting in the wrong way and others take that as representing the whole group.   Many will think that all of them are rude. This is the same with the police officers.   Most try their best in doing their job right and taking care of their community.