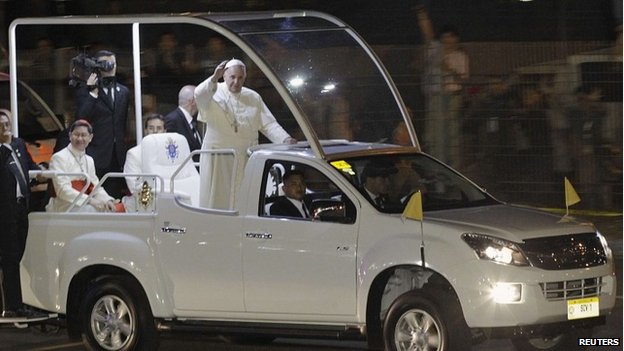 Pope Francis riding the streets of Manila on the PopeMobile

The Pope was greeted by hundreds of thousands of cheering people who waited several hours today in the heat for his arrival in the Philippines. They lined the streets of the capital Manila to glimpse his motorcade.Millions more are expected to come out to see him over his five-day visit to the nation’s 80 million Catholics. The 78-year-old Jesuit pope smiled and waved to the excited crowd as he exited the plane a few minutes later. Children danced on the runway, their red, white, and blue umbrellas forming the Philippine flag. “Mabuhay, Papa Francis which means (Long live, Pope Francis)!” said hundreds of Filipino children who greeted him, part of the 3,000 people in the fiesta-like arrival honors for the Pope. He spent about 30 minutes at the airbase, greeting dignitaries and well-wishers led by President Benigno Aquino III, before riding the popemobile with Manila Archbishop Luis Antonio Cardinal Tagle.

Pope Francis visited the Philippines as Philippine President Aquino is on the last phase of his term. After a landslide win in 2010, Aquino vowed to stop corruption and address poverty; two of the country’s most important problems. A few years ago, the Catholic Church clashed with the government over the passage of a law that allows state funding for contraceptives. The Catholic Church is opposed to the use of all artificial birth control because it views the gift of life as sacred.  A law allowing divorce is also pending before Congress and in conflict with Catholic teachings on marriage. But the core of the Pope’s visit is humanitarian and not overly political.  His trip to the island of Leyte, will allow him to meet the victims of Super Typhoon Yolanda;  the strongest typhoon to hit land and killed over 6,000 people. The reason so many people gathered during this event is because the Philippines main religion is Catholic.