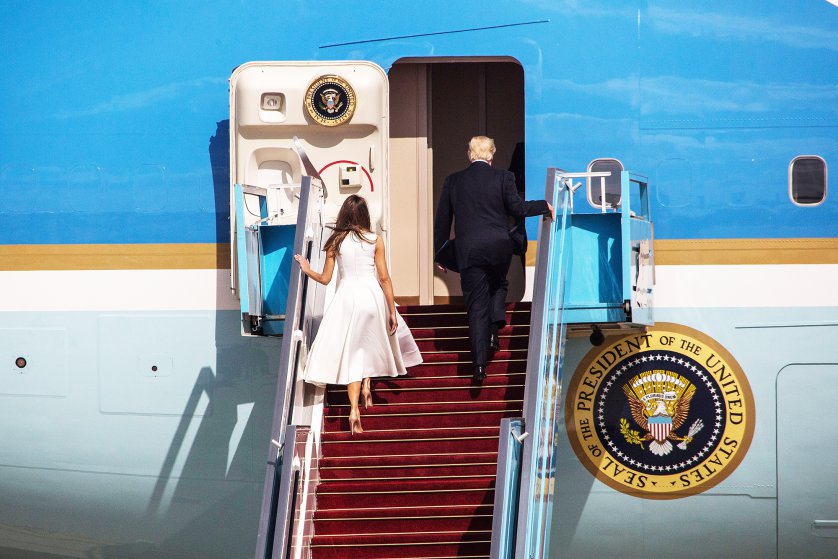 TEL AVIV, ISRAEL - MAY 23: US President Donald Trump waves as he departs Ben Gurion International Airport on May 23, 2017 near Tel Aviv, Israel.This was Trump's first visit as President to the region. (Photo by Ilia Yefimovich/Getty Images)

Donald Trump has been hard to figure out.  He did the Muslim travel ban, he still talks about building the Mexican wall, and recently he kicked out the FBI director.  I wonder if he was kicked out because Comey was appointed by a Democrat and Trump is Republican. Comey was doing a great job, but I say he’s caught something on Trump so Trump did that so Comey won’t do anything.

It actually doesn’t make any sense.  It seems like Trump fired him out of nowhere. In my own effort to make sense out of it I have come up with some reasons; the first reason is we all know about Trump talking in public about the Clinton e-mails and he actually said : “Yes Russia Yes keep hacking her e-mails.”  After a week or so, Clinton e-mails were on the news and everyone was talking about them, so I bet Trump made Russia do it for him. Because Trump said it and it happened after a week. Secondly if Trump is having deals with Russia and Comey was ready to report on his investigation without being loyal to Trump then the logical move for the boss who felt betrayed was to say “you’re fired!”  Thirdly, the Russians aren’t stupid. They are happy to have President Trump because he is good for their business.  So the FBI Director knew what’s going on and Trump wanted to make him look like a bad guy.

This is probably the biggest mistake that Trump has made  so far.  At first he kept Flynn ( National Security Advisor) and he knew that he was making plans with Turkey and Russia and getting paid for it. I mean what kind of President is this? He knew Flynn was self serving instead of serving the US.  President Obama and some judges told Trump that Flynn is under investigation so you don’t give him the job and watch out for him.  Trump didn’t really care about anything Obama and his people said.  He just did what he wanted. Trump also said that he knew it was going to be hard to be a President but not that hard.

I think that Trump won’t be able to stay in the Presidency for 4 years.  He is either going to quit or problems are going to happen and he’s going to be fired. Because being the US president is something really hard, you can make the US or even your own reputation go down instead of making America great again. In a way the United States President is the world’s president; the whole world is watching.

This week the President looked more like a leader as he traveled to Saudi Arabia, Israel and Italy.