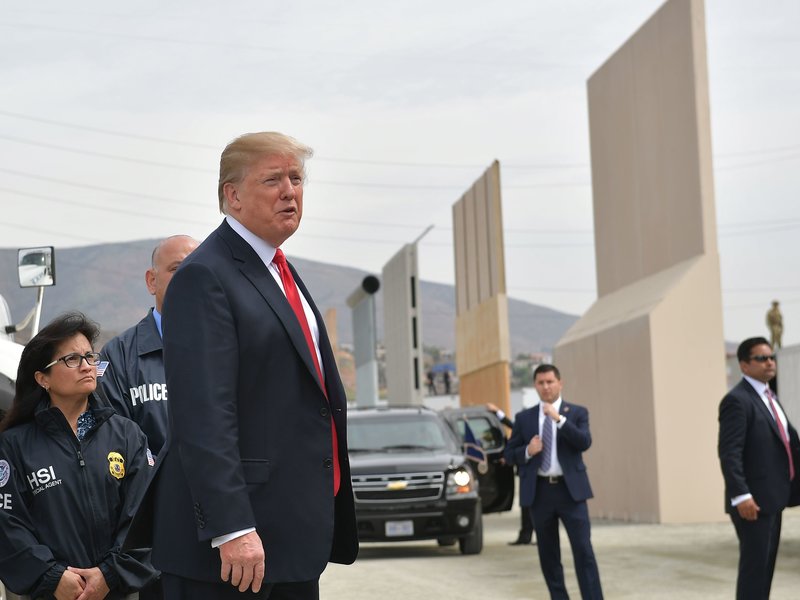 Mr. President Trump  went to California for the first time as president, he visited this Democratic state to talk about building the wall between the U.S and Mexico border. The president went to this democratic states to take a closer look to make plans about how to build the wall along the border with Mexico. The president’s visit in California was awaited by police and protestants. While the president Trump stayed in California he told the reporters the quote that is below…

“If you didn’t have walls,” Trump told reporters during his tour, “you wouldn’t have a country.”

It’s good that the president Trump want to make the country great again but not  necessary have be by making a wall between the U.S and mexico border. The governor of California told Mr.Trump the quote below in a letter he posted publicly Monday.

“You see, in California we are focusing on bridges, not walls. And that’s more than just a figure of speech,” Governor of California Jerry Brown.

The Governor of California is very experienced in his leadership position as he was once governor back in 1975-1983 and has now been governor since 2011.  He knows the people of his state well and was speaking for their needs.  He recognizes the need for better roads and transportation just as he also recognizes the symbolism of a bridge over a wall.

In this country we are people from everywhere that all want to help the country to have a good economy because we are also helping ourselves and our families.  The United States is open with many opportunities for all people no matter what race they are. The governor of California sees that we want a united country and that the President should not divide families especially immigrants by making the wall between Mexico and U.S because it also will cost a lot f money which would affect the economy of the country.

Just a day before Trump’s arrival in California, the state’s Democratic governor, Jerry Brown, called on the president to extend the focus of his visit beyond the wall.

“You see, in California we are focusing on bridges, not walls. And that’s more than just a figure of speech,” Brown said in a letter to the president he posted publicly Monday.

“After you’ve examined your wall prototypes on the border,” he added, “I invite you to head north to the Central Valley — the heart of California. Here in cities like Fresno and Madera more than a dozen bridges are being built for the nation’s firs t and only High-Speed Rail line.”

The Democrats and Republicans are divided on the issue of immigration.

Democrats see immigration as the United States giving immigrants the opportunity to stay in the country legally likewise; they can work for their families and help the economics of the country by working in the U.S.  The Democrats see the education of immigrants as a strength for our future and not a weakness. They want better laws for a better path to citizenship.

“In the shadow of that wall, a deportation force is growing and it is ripping families from one another. It is devastating communities well within the interior of the United States.” -San Diego-based immigration advocate Andrea Guerrero

In the video below President Trump shows that he mostly cares about power more than keeping peace in the world because he is always trying to tell or show that he is ready for any violent act.  He sees himself and his supporters as winners and others as losers.  It is good to be a strong country with a strong military but he is putting all of American money into this and building walls without investing in a better peace and a better path for future generations to be educated and seek peace.  He told the military that he would create the”largest pay raise in over a decade,” brand-new warplanes and and a national strategy that “recognizes that space is a war fighting domain — just like the land, air and sea.”

“We may even have a ‘space force,’ ” he added. “Develop another one: We have the Air Force, we’ll have the space force.”

He even sees space as a place for war instead of a place to view the earth as one planet.  Many have gone to space to find cooperation and see each other as human beings but he wants to go to space for the next war.  He will find that you can not take walls and wars to space.