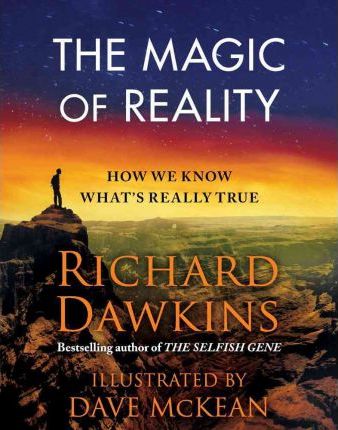 The Magic of Reality, written by Richard Dawkins and Illustrated by Dave McKean. This is a very interesting book that gathers and explains many religious, and superstitious beliefs in a scientific way. At first, I thought it would be a book about just scientific topics, but then I realized that it was dealing with religious and superstitious beliefs as well. It’s not a surprise to know that the same author wrote the book titled, The God Dilution.

One of the topics I consider to be the most compelling is titled: Who Was the first Person? This topic can be described as controversial, hard to believe, and complicated. It starts giving religious examples from different cultures that were trying to explain such question. The most famous example came from the Bible, with the Adam and Eve story. Then, the title changed to: Who was the first person really? Here is where it starts to get weird.  Everyone knows the basic scientific theory of evolution that states that we evolved from hominid  monkeys. But this book went deeper than that and explained this theory in such a simple way that made a lot of sense. It explained how we gradually evolved from our 185 million greats-grandfather fish, to us.

Assuming that we evolved is a huge controversy among everyone due to their personal beliefs or because it is hard to believe. The fear of committing sin just by thinking about it makes this topic a taboo. I have seen a lot of people demeaning the theory of evolution in many ways to convince others that is not true. Ether for religious beliefs or because it sounds impossible; that we somehow are meant to be the best species and we can do whatever we want to other animals and the planet because some kind of miracle will happen to save us.

There is nothing wrong to believe in evolution because that’s part of our history. Denying who we are will make us stuck in conflicts of superiority which blinds so many people and causes problems among us.

Believing in evolution doesn’t mean you are denying your religion. It only means that you are getting a better comprehension of the creation of God. Do you really think the bible will have all the solutions? This holy book was written a long time ago. The comprehension of those people is not the same as the one we have today in terms of science. We shouldn’t take old descriptions to serious but rather adapt them to our modern world. Update the Bible.

Evolution is Just like when we wake up every day, look in the mirror, and not notice any change on us. But we were babies at some point and we can be certain that we had big changes in our bodies and personalities during our childish years. We continue to have changes every day, but they happen so gradually that we don’t notice them. Now imagine the same situation with millions of generations, where our fishy 185 million greats-grandfather slowly transitioned from the ocean to the land.

Of course, it’s hard to believe that at some point we were fishes swimming freely in the ocean. But the whole topic of evolution is much more complicated to explain. What do you think our 185 million grandsons will look like? Would he/she/it look and think so much different that he/she/it will think about us just as we think in our 185 million greats-grandfather of the past? Who knows how long human civilization will still alive to continue evolving.  I just hope we can make it to 2,020.