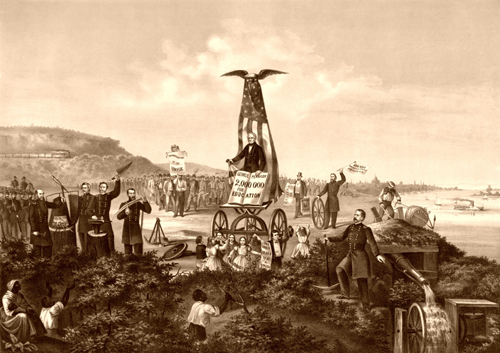 After the victory of the Union in the American Civil War a period of rebuilding the Southern States began.  It was called the Reconstruction Era. This period of Reconstruction was from 1865 to 1877.  At first it was just an idea of President Lincoln but he was assassinated and some disagreed with his position of reuniting the south so quickly. Lincoln’s vice president Andrew Johnson became President and took the control over the Reconstruction of the South.

During Reconstruction President Andrew Johnson gave to the Southern States the chance to rebuild themselves. This also created an opportunity for the South to put limits on the freed Africans. They created the Black codes. After this, Congresses decided to create the Freedmen’s Bureau.   President Johnson was asked to sign laws that gave protection to freed slaves and refugees.  The laws  also said that every person born in the United States would be a citizen with equals rights. After he refused to sign them, he was impeached by Congress. Eventually the Civil War amendments of the 13th, 14th, and 15th were ratified and blacks were made free citizens with the right to vote. 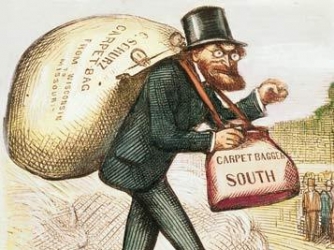 Members of the Freedmen’s Bureau from the North that came to the Southern States to help in the rebuilding were called Carpetbaggers because they were only carrying one bag with them. A group of southern whites who felt threatened by the freed blacks formed a hate group known as the Ku Klux Klan.  This was a group that began lynching Africans and intimidating whites who tried to help them.  The goal was to prevent blacks from voting and having equal rights.  Unfortunately things got worse when Reconstruction ended in 1877.  They did not start improving until the 1940s 1950s and 1960s when World War II and the Civil Rights movement brought progress.  Today our society still has scars from the civil war and the racism that followed.  We are still striving to construct a “more perfect union” that includes everyone in “we the people”.